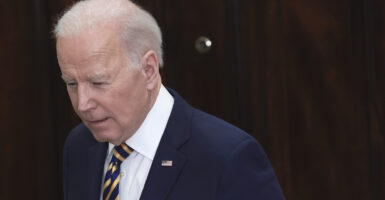 “This country has real problems to solve, and instead the Biden administration is focused on a racist reorganization of the federal government," Heritage Foundation government relations adviser Mike Howell says. Pictured: President Joe Biden arrives Monday in the Roosevelt Room of the White House to announce a ban on imports of Russian oil and other energy products. (Photo: Win McNamee/Getty Images)

President Joe Biden’s Department of Health and Human Services is creating a “strategic plan” to advance goals for “diversity, equity, inclusion, and accessibility” in the federal workforce, according to an internal document obtained by The Daily Signal.

The strategic plan at HHS, implemented in response to Biden’s executive order in June 2021, will build on existing diversity initiatives already in line with administration policy.

Because HHS is the largest grant-making agency in the federal government, awarding more dollars than all other agencies combined, its final strategic plan to increase diversity likely will influence who or what entities will be awarded grants in the future.

“We are a very multiethnic country. You cannot make decisions to apply the law differently because of skin color,” Mike Gonzalez, a senior fellow at The Heritage Foundation, told The Daily Signal when asked to comment on the HHS project. (The Daily Signal is Heritage’s multimedia news organization.)

The HHS diversity plan, like those of other agencies, is supposed to be finalized by March 23. From that point forward, the Department of Health and Human Services must “establish quarterly goals and report annually on goal progress,” the document says.

In late November, the Biden administration followed up on the president’s executive order by giving HHS and other agencies a “road map” to help each craft a strategic plan, reported FCW, a digital publication for federal information technology officials.

Biden’s order included definitions of the terms diversity, equity, inclusion, and accessibility—as well as “underserved communities”—that are meant to serve as a guide for the entire federal workforce.

The definition of underserved communities is the most verbose, taking in “individuals who belong to communities of color, such as Black and African American, Hispanic and Latino, Native American, Alaska Native and Indigenous, Asian American, Native Hawaiian and Pacific Islander, Middle Eastern and North American persons.”

The definition also “includes individuals who belong to communities that face discrimination based on sex, sexual orientation, and gender identity (including lesbian, gay, bisexual, transgender, queer, gender non-conforming, and non-binary (LGBTQ+) persons),” “individuals with limited English proficiency,” “immigrants,” and “individuals who belong to communities that may face employment barriers based on older age or former incarceration.”

Biden’s order says it is possible for individuals to belong to more than one underserved community.

Xavier Becerra, the former attorney general for California who was tapped by Biden as secretary of health and human services, contributes an introductory message to the document.

In it, Becerra says team members “will work hand-in-hand with each operating division and each staff division engaging members of underserved communities to ensure tight collaboration, partnership, accountability, and ultimately, progress toward our DEIA-related ambitions.”

The goal, Becerra adds, is to “embed DEIA [diversity, equity, inclusion, and accessibility] into the fabric” of the work done not just at Health and Human Services, but throughout the entire administration.

An HHS spokesperson did not respond to The Daily Signal’s request for comment on its draft strategic plan.

Mike Howell, a senior adviser on government relations at The Heritage Foundation, said he sees a Biden administration effort to reorganize the federal government along racial lines.

“Nothing good comes of this,” he said.

Biden’s proposed budget for fiscal year 2022 allocates $131.8 billion in discretionary budget authority and $1.5 trillion in mandatory funding for the Department of Health and Human Services, which has about 80,000 employees.

The proposed budget represents an increase of $25.1 billion (or 23.5%) from fiscal 2021, according to an analysis from the nonprofit Association of American Medical Colleges. The agency may spend up to $2.1 trillion in fiscal year 2022, according to government records.

The Department of Health and Human Services exerts significant influence through the grant-making process, where it has established relationships with public and private entities. In fact, the document says, “HHS is responsible for almost a quarter of all federal expenditures and administers more grant dollars than all other federal agencies combined.”

Over the years, the department has collaborated with state, local, tribal, and U.S. territorial governments and partnered with nongovernmental organizations. The HHS document on diversity, equity, inclusion, and accessibility tacitly acknowledges that grant recipients may need to toe the line in following the directives of Biden’s executive order, saying:

Grantees in the private sector, such as academic institutions and faith-based and neighborhood partnerships, provide many HHS-funded services at the local level. HHS also works closely with other federal departments and international partners to coordinate its efforts to ensure the maximum impact for the public.

Amid the jargon on “DEIA” directives, Heritage’s Howell told The Daily Signal, he sees much at stake for taxpayers. He said he anticipates that Biden administration officials will make a concerted effort to funnel grants to groups viewed by the administration as sufficiently woke.

“They are steering taxpayer resources—via the federal government’s enormous grant power—to organizations that only adhere to the wokest and most racially divisive principles,” Howell said.

Although diversity, equity, inclusion, and accessibility have “been a focus” for many HHS divisions, the document says, these goals have not been a particularly high priority at the department level for the “last few years,” an apparent reference to the Trump administration.

The Office of Equal Employment Opportunity, Diversity and Inclusion, within the purview of the assistant HHS secretary for administration, is expected to play a key role in rectifying any shortcomings.

The office has been assigned the task of ensuring accountability “across three tiers” as officials implement the strategic plan: the DEIA Executive Council, the DEIA Advisory Committee, and the DEIA Division Council. The document says the office will provide support with “messaging” and “tools to collaborate most effectively” to ensure implementation of the plan.

In his introduction to the HHS document, Becerra says that by successfully implementing these initiatives, his department will be in a better position to “tackle disparities in who gets access to health care and human services.”

But Heritage’s Gonzalez, who writes on critical race theory, identity politics, diversity, and multiculturalism, said he is not sure that Biden’s plans could pass the court system’s “strict scrutiny” standard, a form of judicial review based on the 14th Amendment’s equal protection clause.

Gonzalez said he views the Biden administration’s approach to diversity and related issues as a “facade” designed to “enforce intellectual conformity” in violation of “individual identity.”

He also is concerned that seemingly benign definitions of diversity, equity, inclusion, and accessibility belie a political agenda, Gonzalez said:

Equity is just the opposite of equality. It has come to mean the government administering justice unequally depending on what race you are or what ethnic category the Census Bureau has put you in.

It is the opposite of the government treating you on a colorblind basis. Inclusion really just leads to speech codes. You lose your right to speech because you cannot say something that might discomfort others.

Five principles are folded into the HHS strategic plan, according to the document obtained by The Daily Signal.

Principle 1 is “Demonstrated focus on increasing diversity within HHS.” The main objective is to address what the department views as “lack of a central recruitment and outreach strategy” for “underrepresented minorities.”

Principle 2 is “Improved retention and opportunity creation,” meant to address “a particular lack of promotion or advancement” of “underrepresented groups.”

Principle 3 is “Enhanced climate for equity, inclusion, and accessibility.” Although “significant activity” corresponds with the goals of Biden’s order, a “weak” and “inconsistent” connection exists between the department’s leadership and divisions charged with implementing diversity, equity, inclusion, and accessibility directives that this principle is expected to rectify.

Principle 4 prioritizes “Leadership-driven DEIA cultural reform” so that communication may be strengthened and supervisors have a firm grasp on how “to lead their teams through DEIA-related topics.”

Although the document credits the Department of Health and Human Services with being out in front of other federal agencies where diversity initiatives are concerned, it says HHS has fallen short in updating pertinent information.

The document states that the department

has created an HHS-wide demographic survey to update current information and is the first agency to include sexual orientation and gender identity for the entire workforce. However, the quality, consistency, and availability of up-to-date demographic data remains a challenge.

The HHS document also says that the department has named a new chief diversity officer, but doesn’t specify who that is.

Biden’s executive order on diversity, equity, inclusion, and accessibility is only one of at least eight executive orders signed by the president to address diversity and equity objectives, according to the document.

But unlike the other Biden orders, the document says, this one promotes an “internal (government workforce) focus for every federal department/agency.”