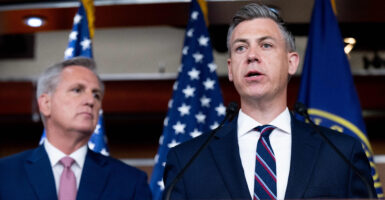 Some House Republicans are urging federal action to bar private money from bankrolling election administration after a Big Tech-aligned group that made controversial grants in 2020 is issuing another round of grants aimed at the 2024 elections.

“Private money has no place in public election infrastructure,” Rep. Jim Banks, R-Ind., told The Daily Signal in a statement.

The Daily Signal first reported last week that the U.S. Alliance for Election Excellence, a project of the Center for Tech and Civic Life, has given out $500,000 grants to at least two election jurisdictions—Greenwich, Connecticut, and Macoupin County, Illinois. On Friday, the Wisconsin State Journal reported that the city of Madison received $1.5 million from the group.

These grants come after 24 states enacted bans on the use of private funds for local government election administration.

“I’m grateful that nearly half of all states have banned these shady practices, but most Democrat-controlled states will never prevent their Big Tech partners from influencing their elections,” Banks continued. “A Republican House majority needs to step up and pass national legislation to prevent private actors from funding election organizations.”

Mostly red states enacted the bans, but so did some that voted for Democrat Joe Biden in the 2020 presidential election: Arizona, Georgia, Pennsylvania, and Virginia.

In 2021, while in the House minority, Banks joined 11 other Republicans in co-sponsoring legislation to amend the Internal Revenue Code to prohibit 501(c)(3) tax-exempt organizations from providing direct funding to official election administrations.

In 2020, the Center for Tech and Civic Life distributed $350 million in grants to various local election offices, funded by Facebook founder Mark Zuckerberg. Zuckerberg reportedly spent a total of $419 million on the election, giving the remaining amount to the Center for Election Innovation and Research, which also gave to local election offices.

In April, the Center for Tech and Civic Life launched the U.S. Alliance for Election Excellence in partnership with several other nonprofit organizations, including the Center for Secure and Modern Elections, which is a project of the New Venture Fund backed financially by Arabella Advisors. Arabella has established and funded numerous groups on the Left.

“In the 2020 election, the [Center for Tech and Civic Life] spent millions of dollars funneling money into Democrat election precincts to fund voter-registration drives, get-out-the-vote campaigns, and other grassroots efforts that helped Democrat politicians,” Rep. Lauren Boebert, R-Colo., told The Daily Signal in a statement.

“You want to know why many people across the country have serious questions about the integrity of our elections?” added Boebert, who also co-sponsored the End Zuckerbucks Act in 2021. “It starts with shady stuff like this, where left-wing Democrat organizations launder money to local government election agencies to influence election results. Private money should be removed from our election administration system.”

According to the Center for Tech and Civic Life, the grants aimed to help election officials deal with COVID-19 concerns in the 2020 election. Yet, local officials used very little of the money to buy personal protective equipment, instead spending funds on getting out the vote and opening new polling places. A whopping 92% of the funds went to Democrat-leaning precincts, according to an analysis by the Foundation for Government Accountability, a watchdog group.

The Center for Tech and Civic Life did not respond to The Daily Signal’s request for comment before publication.

The U.S. Alliance for Election Excellence selected 10 jurisdictions to be part of its program for grants and training. They include jurisdictions in battleground states such as Wisconsin, North Carolina, Michigan, and Nevada. But jurisdictions also included clearly blue states, such as two counties in California, two counties in Illinois, and one Connecticut city.

The largest funder of the alliance’s five-year, $80 million initiative is the Audacious Project, which is financed largely by those connected with the Big Tech sector, including Microsoft and Amazon, and is described by Inside Philanthropy as “a tech-heavy group of funders that lean liberal in their grantmaking.”

The Daily Signal made public records requests in the 10 jurisdictions and to date found that Greenwich, Connecticut, and Macoupin County, Illinois, each got $500,000 grants. These were divided into $150,000 given in December and $350,000 to be awarded in December 2023, ahead of the 2024 presidential election year.