‘Zuckerbucks’ in Pennsylvania Reveal Impact of Corporate Influence in Elections 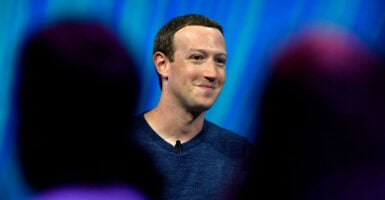 The Chan Zuckerberg Initiative, founded by Facebook CEO Mark Zuckerberg and his wife Priscilla Chan gave the Center for Tech and Civic Life more than $350 million to promote safety during the 2020 election. Public records show that in Pennsylvania, most of the money was used for get-out-the-vote efforts instead, likely swaying the election. (Photo: Gerard Julien/AFP/Getty Images)

Hayden Dublois is a senior research analyst for the Foundation for Government Accountability.

Trevor Carlsen is a senior research fellow at the Foundation for Government Accountability.

All eyes were on Pennsylvania during the days of ballot counting following the November presidential election, as allegations and rumors of voting irregularities spread like wildfire. While the results ultimately were upheld, distrust in our representative government remains as does a deep suspicion that elected leaders are legitimate.

Before the next election, Pennsylvania needs to look into ways the state can protect its elections, restore confidence, and avoid this turmoil in the future.

A recent poll by the Opportunity Solutions Project reveals several commonsense steps Pennsylvania can take to safeguard its elections.

Actions that have proven to be widely popular across the political spectrum include using existing technology to livestream ballot counting and monitor ballot drop boxes, imposing penalties on officials who mislead the public, and requiring mail-in ballots to be postmarked by Election Day.

Each of these reforms would go a long way in helping Pennsylvanians better trust their local election results.

But in the aftermath of the 2020 election, a more egregious violation of that trust has emerged—the growing influence of corporate money in local jurisdictions. And Big Tech is the biggest offender.

During the last election cycle, the Chan Zuckerberg Initiative, founded by Facebook CEO Mark Zuckerberg and his wife Priscilla Chan, gave the Center for Tech and Civic Life more than $350 million to award “grants” to local jurisdictions as a way of allegedly helping counties and municipalities run their elections safely during the COVID-19 pandemic.

This money—which the Foundation for Government Accountability has dubbed “Zuckerbucks”—was supposed to help with pandemic-related expenses, including personal protective equipment and other unique challenges at a time of social distancing.

Requests for public records in Pennsylvania counties have revealed that most of this money wasn’t used for personal protective equipment but for get-out-the-vote efforts and other non-related COVID-19 expenses, which influenced Democrat turnout and actually may have affected the results of the election in the state.

Twenty-three of Pennsylvania’s jurisdictions, plus the Pennsylvania Department of State, received more than $20 million from the Center for Tech and Civic Life. Chester County received $2.5 million, the second-largest grant in the state, which was more than the county’s entire 2020 budget for voting services.

Philadelphia received nearly five times as many “Zuckerbucks” as Allegheny County, despite being only slightly larger in population. Dauphin County asked for $206,471, but was actually granted more than double that amount. Although Hillary Clinton narrowly won this county in 2016, Joe Biden increased the Democrat vote total by 22%.

There is also evidence that Zuckerbucks influenced election outcomes by mobilizing Democrat voters. Democrat turnout in Zuckerbucks counties didn’t match the changes experienced in counties without the influx of cash.

Who knew that personal protective equipment had such an impact on voter turnout?

Well, it doesn’t, really. Available data highlights the fact that only a fraction of the money requested went toward protective measures.

Philadelphia received a $10 million grant, $250,000 of which was requested for personal protective equipment. To put that in perspective, the entire operating budget for the city commissioners is $12.3 million. The city also requested money to “be intentional and strategic in reaching our historically disenfranchised residents and communities.”

Intentions aside, this doesn’t have much to do with the pandemic—which, after all, was allegedly the entire purpose behind these “COVID-19 response grants.”

Chester County used hundreds of thousands of dollars on outreach, including an “oversized postcard” to all voters, a promotional video in Spanish and English, and an online voter registration drive. The county used only 6% of its grant toward personal protective equipment, sanitizer, and other COVID-19-related expenses.

To make this bleak situation worse, these numbers reflected only the stated intentions of these counties on how they planned to spend the money. How exactly these millions were spent remains a bureaucratic mystery.

In fact, the Luzerne County ad hoc Election Inquiry Committee couldn’t even determine the chain of command regarding how the grant funds were applied, managed, and spent.

If a grant wasn’t used for personal protective equipment, why were local jurisdictions allowed to spend tens of millions of dollars from third parties ahead of the election? Better yet, why did they receive this money in the first place?

The answer is simple: because they can.

Private and not-for-profit money directly influencing elections is a major problem, particularly when it was used to create greater voting opportunities in certain areas of the state favoring one political party and its candidates.

And to be fair, Pennsylvania recognized this issue before the 2020 election and made attempts to protect the integrity of the election through court and legislative actions.

With the “success” of Zuckerbucks last year, nothing is stopping billionaires from California and New York from exerting this same partisan influence in 2022, 2024, and beyond.