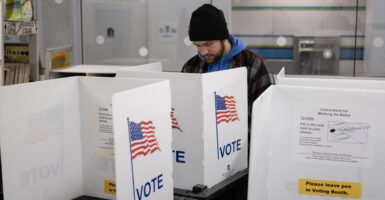 "The problem is the same: an unprecedented intrusion into our election system that should concern every American," Capital Research Center's Hayden Ludwig says. Pictured: A voter makes choices Nov. 8 at the Hillel Foundation in Madison, Wisconsin. (Photo: Jim Vondruska/Getty Images)

A tech group backed by Facebook founder Mark Zuckerberg during the 2020 election cycle has announced jurisdictions for a new election-related initiative that include portions of the battleground states of Wisconsin, North Carolina, Nevada, and Michigan.

After the controversy following distribution of $350 million in grants by Zuckerberg and his wife, Priscilla Chan, to promote mail-in voting, drop boxes, and other election-related projects, the billionaire said they no longer would finance the liberal Center for Tech and Civic Life for future election projects.

However, in April, the center announced it was establishing the U.S. Alliance for Election Excellence. As reported by The Daily Signal in July, the largest funder of the alliance’s $80 million, five-year initiative is The Audacious Project, financed largely by those connected with the Big Tech sector, including Microsoft and Amazon.

Last Wednesday, one day before Thanksgiving, the alliance released its list of 10 finalists as so-called Centers for Election Excellence. The organization says the designation recognizes that these jurisdictions “are committed to leadership in election administration and looking to develop even more resilient, trustworthy, and voter-centric election administration practices.”

“I am thrilled that after a nationwide call for applications from jurisdictions across the country, we have named these jurisdictions as finalists to become a 2023 Center for Election Excellence,” Tiana Epps-Johnson, executive director of the Center for Tech and Civic Life, said in a public statement.

“These jurisdictions are committed to safe, secure, and inclusive elections that put voters first. I’m thrilled to work with these hardworking local election staff to take their election administration work to the next level,” she said.

Although 21 states enacted bans prohibiting private actors such as Zuckerberg from financing election administration, the Alliance for Election Excellence could be an end run around such laws to ensure more victories for the Left, critics say.

The Center for Tech and Civic Life “switched from trying to privatize election funding in 2020 to ‘training’ the officials who run our elections in 2022 to counter ‘misinformation.’ The problem is the same: an unprecedented intrusion into our election system that should concern every American,” Hayden Ludwig, a senior investigative researcher for the Capital Research Center, a Washington-based investigative think tank that monitors nonprofits, told The Daily Signal in an email Monday.

An investigation by a Wisconsin special counsel produced a report finding that the funding of election administration led to an improper, government-sanctioned, get-out-the-vote campaign that favored Democrats.

Another major partner in the alliance is the Center for Secure and Modern Elections, a project of the Arabella Advisors-sponsored New Venture Fund that advocates automatic voter registration.

Arabella has sponsored numerous liberal organizations across the country, some as pop-up groups that exist for a single election cycle, others that spin off to become independent nonprofits.

—Hasso Plattner Institute of Design, part of the engineering school at Stanford University in California.

—The Elections Group, which provides consulting to election officials and was established in 2020 in response to the COVID-19 pandemic.

—Prototyping Systems Lab at University of California, Davis, which focuses on designing technology.

—U.S. Digital Response, which started during the pandemic to help state and local governments with their digital needs.

The Alliance for Election Excellence is one of nine grantees of The Audacious Project, also known as TAP, with donors including:

—The Bill and Melinda Gates Foundation, aligned with the Microsoft founder and his ex-wife.

—The Laura and John Arnold Foundation, started by hedge fund manager John Arnold and his wife.

—MacArthur Foundation, one of the largest foundations in America, which backs mostly left-leaning causes.

—Bridgespan Group, which does consulting work for nonprofits, including Planned Parenthood and National Public Radio.