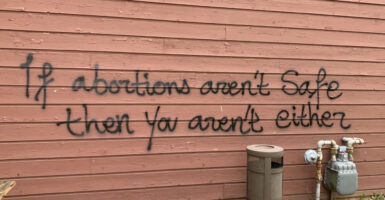 Amid scores of attacks on pregnancy centers, the Justice Department shared with Republican Texas Rep. Chip Roy that it is investigating “multiple reports” of “potentially unlawful conduct” against pro-life pregnancy resource centers, a letter obtained by The Daily Signal shows.

The letter, which Roy’s office received Tuesday, divulges very little real information about the Justice Department’s investigations into the vast array of attacks on pregnancy centers that have occurred since the May leak of the draft opinion indicating Roe v. Wade would be overturned.

Roy expressed frustration to The Daily Signal that the Justice Department response evaded his specific questions on both the dramatic FBI arrest of Catholic father Mark Houck as well as the onslaught of attacks on the pregnancy centers.

“The Biden DOJ’s refusal to respond to any of our questions or document requests is unacceptable,” Roy said in a Tuesday statement. “I will not stop seeking answers. Republicans should remember this when it comes time to fund DOJ’s programs and when we hold subpoena power. They will cooperate or they should be held accountable.”

In response to multiple demands for explanation from the congressman, Assistant Attorney General for the Office of Legislative Affairs Carlos Uriarte emphasized that the Freedom of Access to Clinic Entrances (FACE) Act protects “all patients, providers, and facilities that provide reproductive health services, including pro-life pregnancy counseling services and any other pregnancy support facility providing reproductive health care.”

“The FACE Act also protects individuals exercising their First Amendment right of religious freedom
and places of religious worship,” Uriarte added. “Working with state and local law enforcement partners, the Department will investigate and, where supported by the facts and the law, prosecute the use of force, threats of force, or obstruction intended to interfere with reproductive health care or religious worship, regardless of the type of service or worship at issue.”

“Federal authorities are investigating these reported incidents and are working to identify the perpetrators,” he noted. “As in every investigation, the Department will follow the facts and the law wherever they lead and will take appropriate action at the conclusion of these ongoing investigations, which may include prosecution under the FACE Act.”

At least 98 Catholic churches and 77 pregnancy resource centers and other pro-life organizations have been attacked since the May leak, according to CatholicVote trackers. Vandals often spray paint the messages “if abortions aren’t safe then you aren’t either” and autograph the destruction, “Jane’s Revenge.”

As recently as Saturday, a Catholic campus ministry center at the University of Nebraska discovered a death threat note that read, according to the Catholic News Agency: “If our right to abortion in Bellevue is taken away due to the attempt to pass an abortion ban and it gets passed[,] we will shoot up your Newman center with our new AR-74 rifles. Sincerely, Jane’s Revenge.”

The FBI and the DOJ continue to refuse to provide The Daily Signal on what number of attacks on pregnancy centers are being investigated and prosecuted under the FACE Act.