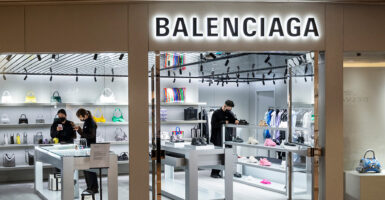 “Those who are expressing outrage, I think are doing so very rightly,” Lisa Thompson said, but added that this “isn't the first time we've had situations like this where children are being hypersexualized.” Pictured: A Balenciaga store in Hong Kong, Aug, 10, 2021. (Photo: Budrul Chukrut/SOPA Images/LightRocket/Getty Images)

The images are proof we are in a “downward spiral” when it comes to the sexual exploitation of children, Lisa Thompson, vice president of research for the National Center on Sexual Exploitation, told The Daily Signal during a phone interview Tuesday.

Balenciaga, a luxury fashion line, is being criticized for the sexual nature of the ads and concerns over the ads promoting child pornography and the sexualization of children.

“Companies that engage in this kind of advertising need to be held accountable,” Thompson said.

The fashion company has also come under harsh criticism for an ad promoting a handbag that ranges in price from $3,450 to $4,000. The ad showcased the bag tossed on an office desk laying on top of papers, including what appears to be a 2008 Supreme Court ruling on a child pornography case.

Balenciaga has removed all the controversial ads from all its platforms and issued an apology.

“We strongly condemn child abuse; it was never our intent to include it in our narrative,” the company said on Instagram. “The two separate ad campaigns in question reflect a series of grievous errors for which Balenciaga takes responsibility,” Balenciaga said.

Unfortunately, Thompson says the ads are representative of an ongoing issue within culture that normalizes pornographic images.

“Those who are expressing outrage, I think are doing so very rightly,” Thompson said, but added that this “isn’t the first time we’ve had situations like this where children are being hypersexualized.”

Britney Spears was a minor, just 17, when Rolling Stone featured her on a 1999 cover of its magazine lying in bed with an open shirt to show her bra and holding a Teletubby. Thompson says French Vogue came under criticism in 2011 when it featured child models in sexualized poses.

It is the “mainstreaming of adult pornography that has largely led us to where we are,” Thompson said, adding that an additional issue today is children are becoming “their own exploiters.”

The National Center on Sexual Exploitation reports that “more than half of children in the U.S. now [own] smartphones by age 11.”

At this moment in history, “the situation for children I think is absolutely dire,” Thompson said, adding that many people are working hard to stop the sexual exploitation of children, but “the public outcry is still not enough.”

The one positive thing about the Balenciaga ad campaign, Thompson said, is that “it’s shining light on the horrible problem we have with child sexual abuse material and the mainstreaming of the sexualization of children.”