High Inflation: The Gift That (Unfortunately) Keeps on Giving This Thanksgiving 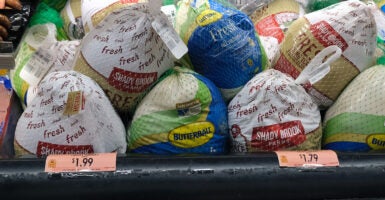 Inflation means Americans will be paying a lot more this year to travel to Thanksgiving gatherings, buy the meal, and go shopping on Black Friday for holiday gifts. Pictured: Frozen turkeys on display in a grocery store on Nov. 14, 2022. The price of turkeys is at record highs this year. (Photo: Spencer Platt/Getty Images)

Americans can expect to pay more to drive to Grandma’s house for Thanksgiving next week, and Grandma will have to pay more for the traditional feast, according to new inflation data from the Bureau of Labor Statistics.

Let’s start with energy prices. The October consumer price index shows yet another month of price increases, with prices rising 1.8% from September and 17.6% over the past year.

Specifically, gasoline prices have risen by over 17% in the past year. And if you want heat at Grandma’s house, fuel oil has risen by 68%, electricity by 14%, and natural gas by 20%.

Data from the Energy Department tell the same story. According to the Energy Information Administration, as of the week of Nov. 14, the average cost for regular gasoline was over $3.75 per gallon, which is 57% higher than when President Joe Biden took office in January 2021.

The Energy Information Administration’s data on diesel prices are even more alarming, showing them nearly doubling with an increase of almost 96% since Biden’s inauguration. Per gallon diesel prices have averaged above $5 over the past six months alone.

These prices are not only showing up at the pump—they are also reflected in the cost of food on the Thanksgiving table and in the price tags on your Black Friday purchases the next day. That’s because commercial trucks, which transport over 70% of U.S. goods (based on value), are predominantly powered by diesel fuel. So, to the extent that truckers can pass on their increased fuel costs, families should expect to pay more for food and gifts this holiday season.

Food prices already have been rising at rates not seen in over 40 years, partly due to transportation costs. October food prices rose by nearly 11% compared to a year ago. This upswing is reflected across almost all food categories.

So, how much is your favorite holiday meal going to cost?

Prices for the Thanksgiving turkey and ham have increased by 17% and 9%, respectively. But meat and poultry are not the only categories facing price hikes. The cost of fresh vegetables has gone up 8%, with potatoes alone going up over 15%. If you plan to feast on a piece of warm pie and a tall glass of milk for dessert, based on the latest data, you can expect to pay over 18% more for the pie and 14% more for the milk.

For many Americans, the holiday season already comes with financial stress, absent the rising costs of food and fuel. While the inflation rate has declined to 7.7% from 9.1% a few months back, families are obviously still hurting. This is especially true for lower-income families, because they already spend a larger portion of their after-tax income on these basic necessities.

Yet, the administration continues to wage a war against conventional fuels, opting to reduce access to energy instead of unleashing it. That has undoubtedly contributed to the rising costs we’re seeing today across the economy. From canceling vital pipeline projects to restricting energy production on federal lands and waters, the Biden administration has implemented a host of policies that perpetuate a state of energy scarcity.

Rather than continuing to restrict Americans’ choices and limiting access to affordable, abundant energy, Congress and the administration ought to prioritize eliminating regulatory barriers that ultimately drive up the cost of food, fuel, and other necessities. This would ease inflationary pressure for countless families and offer a much-needed financial reprieve for the holidays to come.