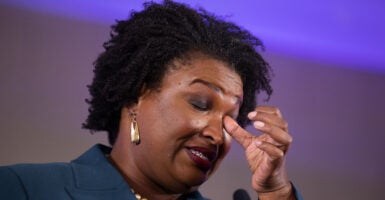 Democratic gubernatorial candidate Stacey Abrams wipes her eye during a concession speech to supporters during an election night party Nov. 8 in Atlanta. Abrams lost her bid for governor to incumbent Gov. Brian Kemp in a rematch of their 2018 race. In 2018, she did not concede defeat following the election. (Photo: Jessica McGowan/Getty Images)

Mick Mulvaney is a former member of Congress, director of the Office of Management and Budget, and White House chief of staff. He is currently the co-chair of Actum, a global consultancy.

There are many insights to be gained, lessons to be learned, and stories to be told about the 2022 midterm elections. One, however, has not a single thing to do with any candidate or policy. It has to do with words.

We all know that words matter. This is why in any discussion, control of the language is critical. Thus, instead of talking about abortion, we talk in terms of “choice” and “life,” and we have “climate change” instead of “global warming.”

Such was the case during the midterms. Two words were centrally featured in the run-up to the election, throughout the day itself, right through to the post-mortems:  “election denier.”

If you watched any coverage of Election Day, you heard that term repeatedly. It became a synonym for crackpot, right-wing, mega-MAGA candidates. The media fell over themselves highlighting just how many of these crazies were running on GOP tickets. CBS News set the number at 308; The Washington Post claimed 291; The New York Times, apparently less diligent in its research, could only find “more than” 220. (The Brookings Institute claimed there were as many as 345 of these deviants on the ballot.)

With a spread like that, it might lead one to wonder: What exactly is an election denier? While a fair question, this is oftentimes the hardest part of any investigation into language. What a word means, it seems, is often subjective. Just as often, it is unclear on purpose, as close scrutiny might undermine its value.

So, it was somewhat surprising to see that at least one media outlet actually had the honesty to define, on election night, what it meant by the term. Per CBS News, it means precisely this:

4) Signing onto the Texas lawsuit regarding the 2020 election.

5) Objecting to the certification of the Electoral College results in 2020.

6) Or being “unclear” as to whether Joe Biden was legitimately elected in 2020.

The lawyers reading this will know that the “or” at the end means that you only need to meet one of those criteria to satisfy the test. So, one comment that the election was stolen, and you are an “election denier.” And CBS, again, to its credit, confirmed that on air.

The repetition of the limiting “in 2020” or “Biden” is also instructive. We’ve had elections for a long time, it seems. Quite regularly, in fact. And when we are dealing with something as fundamental to the functioning of our Republic as questioning the outcome of the democratic process, there doesn’t seem to be a good reason to limit those factors to just the last 24 months.

Interestingly, if that “in the 2020 election” goes away, the list of culprits changes dramatically. With the limitation, you capture such towering national figures as Mark Fincham and Kristina Karamo. But once you drop it, the list of crazy misfits looks a lot more familiar:

Applying the CBS criteria to elections other than 2020, all of them, every single one, is an election denier. Indeed, some of them, several times over. Carter seemed to make a hobby of it, questioning the legitimacy of the 2000, 2004, and 2016 elections. Or, more concisely, every Republican presidential victory this century.

Jan. 6 was a travesty, and the Republican Party will be working for years to undo the damage it did to this country, and to remove that stain on its own reputation. And without question, unsubstantiated and debunked claims of a stolen election contributed directly to what happened that day. But to assert that one party, and one party alone, is responsible for the undermining of confidence in the integrity of elections is to revise history. And to abuse the language.

At some point we may start to acknowledge that both parties are responsible in some measure for the challenges we face in our polity. And at some point we might begin to address those challenges. But we won’t be able to do that if we cannot even agree on what words mean.