15 Million Votes in 2020 Election Not Accounted For, Report Finds 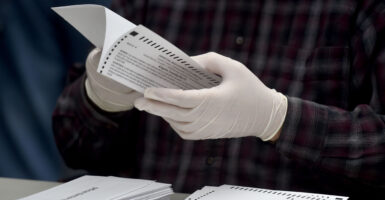 “These figures detail how the 2020 push to mail voting needs to be a one-year experiment,” says J. Christian Adams, president of the Public Interest Legal Foundation. Pictured: An employee of Luzerne County, Pennsylvania, opens mail-in ballots at the Bureau of Elections. (Photo: Aimee Dilger/SOPA Images/LightRocket/Getty Images)

Almost 15 million mail-in ballots were unaccounted for in the 2020 presidential election, and more than a million more ballots were undeliverable, according to a new study.

The Public Interest Legal Foundation, a conservative watchdog group on election integrity, released a research brief Wednesday assessing the effect of mass mail-in balloting in an election with a close presidential race in key battleground states such as Arizona, Georgia, and Wisconsin.

“These figures detail how the 2020 push to mail voting needs to be a one-year experiment,” J. Christian Adams, president of the Public Interest Legal Foundation, said in a public statement.

Joe Biden defeated Donald Trump in the presidential race with an Electoral College victory of 306 to 232 after winning Arizona, Georgia, and Wisconsin by 0.6 percentage points or less.

A Washington Post analysis in February found that flipping fewer than 43,000 votes across those three states could have changed the election outcome. In the nationwide popular vote, Biden received 81,268,924 votes to Trump’s 74,216,154—a margin of 7,052,770 votes.

The Georgia Election Board voted Wednesday to conduct a review of election questions that emerged from Fulton County, the state’s most populous county.

The review panel will investigate Fulton County’s handling of elections—not only in 2020 but complaints predating that—and could result in the state’s choosing an administrator to replace the Fulton County Registration and Elections Board.

The report from the Public Interest Legal Foundation analyzes the undeliverable, rejected, and unaccounted-for ballots in 2020.

“The U.S. Election Assistance Commission asks local officials how many ballots were not returned as voted, were undeliverable, or were otherwise ‘unable to be tracked,’” the report says, adding:

The USPS Inspector General most recently reported that only 13% of mail ballots in the 2018 general election used the official tracking system. This means there is a wide variety of things that can happen to a ballot in the ‘unknown’ column.

A ballot can be put in the wrong mailbox and land in an unfriendly neighbor’s trash. It can be thrown out with your unpaid bills. It can be left outside for the wind to carry the last mile (like seen in Nevada in 2020). Election officials simply do not know what happened. Unknown ballots are the greatest blind spot in the American electoral system.

Democrats in Congress back expansion of mail-in voting in legislation known as HR 1 and S 1, dubbed the For the People Act, which also would allow the controversial practice of ballot harvesting, ban most voter ID laws, and restrict states in maintaining voter rolls.

“Bills like HR 1/ S 1 risk inflating these numbers even further, pushing our election system toward error, disenfranchisement, and ultimately widespread doubt about election outcomes,” said Adams, who was previously a Justice Department lawyer. “Some of the counties with the least experience in administering mail voting rejected the most ballots nationwide. If continued, 2020-style chaos will become the norm.”

Officials across the nation increased mail-in voting in 2020, citing the COVID-19 pandemic. Because of this, the number of lost ballots doubled or nearly doubled in most categories from the last presidential election, the legal organization report found.

Only nominally competitive states Pennsylvania and New Mexico had counties in the top 10 for rejected ballots.