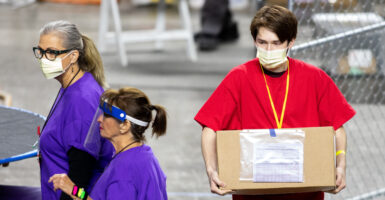 “It has been nothing but delays, delays, delays," Arizona Senate President Karen Fann says. Pictured: Contractors for Cyber Ninjas, a firm hired by the state Senate, move Maricopa County ballots May 8 that will be examined and recounted at Arizona Veterans Memorial Coliseum in Phoenix. (Photo: Courtney Pedroza/ Washington Post/Getty Images)

Arizona Republicans at the state level are squaring off against their counterparts at the county level over an election audit, even though leaders on both sides agree that Joe Biden defeated Donald Trump to win Arizona’s 11 electoral votes.

“This has nothing to do with overturning the election or decertifying electors or anything else. It never has been about that,” state Senate President Karen Fann said during a public meeting Tuesday about the audit of the election results in Maricopa County, the state’s most populous county and second-largest voting jurisdiction.

“What this is about—the Arizona Senate, we are in charge of creating and passing laws that ensure that elections are done properly, accurately, safely, with full election integrity,” Fann said, adding: “I have said from the get-go I am relatively certain that we are not going to find anything of any magnitude that would imply that any intentional wrongdoing was going on.”

The county’s resistance includes refusing to participate in a special meeting called Tuesday by Fann that included the auditors and the Senate’s liaison to Maricopa County—former Arizona Secretary of State Ken Bennett.

The meeting at the state Capitol in Phoenix, running just over an hour, proved to be a rather reserved session as Fann and only one other senator, Judiciary Chairman Warren Petersen, questioned a panel of three persons involved in the audit.

By contrast, the meeting the night before of the Maricopa County Board of Supervisors in some ways resembled a long Trump tweet thread. It ran for fewer than 20 minutes, with elected officials bellowing words such as “sham,” “craziness,” and “circus.”

“I just want to make it clear: I will not be responding to any more requests from this sham process,” Board Chairman Jack Sellers, a Republican, said. “Finish what you are calling an audit and be ready to defend your report in a court of law. We all look forward to it.”

Maricopa County officials took umbrage to questions posed by  Fann in a letter last week. They particularly called out a cybersecurity firm, Cyber Ninjas, that is conducting the election audit, and especially a tweet from the Senate’s liaison for the audit that seemed to allege a cover-up.

“This board is done explaining anything to these people who are playing investigator with our constituents’ ballots and equipment paid for with real people’s tax dollars,” Sellers said.

Regarding the auditors, he said: “They can’t find the files because they don’t know what they’re doing.”

During the Arizona Senate hearing, Fann addressed the cost concerns, noting that the Senate sought to do the audit as a team effort with the county, which would have saved money and avoided the relocation of ballots or equipment.

After initially pledging cooperation, the county sued the Senate.

I’m only saddened it has cost us more taxpayer money, because we never wanted the ballots and equipment moved to begin with. We said, ‘Let us go there. Let us do this together.’ Instead, we have had to spend so much more taxpayer money on having to rent the coliseum out and set up the security system. It’s sad we had to spend all that extra money when we could have just done it for less had we worked together as a team.

Fann was referring to the Arizona Veterans Memorial Coliseum in Phoenix.

The audit of the election in Maricopa County, which has about 4 million residents, is reevaluating 2.1 million ballots. It is likely to wrap up by the end of June, Cyber Ninjas CEO Doug Logan told senators.

The election results in Arizona were among the narrowest of state outcomes in November. Because of its size, Maricopa was key to Biden’s margin of victory over Trump, who narrowly carried the county in 2016.

‘We Don’t Need to Do Name-Calling’

At most, the audit could change the winner of Arizona, but it wouldn’t change the national outcome since Biden would retain enough electoral votes to win the presidency.

In December, a state judge upheld the Arizona Senate’s authority to subpoena information from Maricopa, The Associated Press reported.

Cyber Ninjas’ Logan said his company has worked in the past with the financial services industry and the government, in response to criticism that it had no experience with elections.

Logan said the audit is being livestreamed 24/7 and a full digital trail is in place. Each ballot is certified by three people, he said, so it is impossible for one person to meddle with the tally.

All ballots are under armed security, Logan said.

“This is the first forensic audit done on this scale in the history of this country,” said Petersen, the Judiciary Committee chairman, a Republican who rejoined the Senate in January and also has served in the state House.

Petersen, whose district includes Gilbert and parts of Maricopa County, added: “Not only do we have 24-hour security, we also have 24-hour efforts to shut down the audit.”

Expressing regret that county officials did not participate in the hearing, Petersen said, “We want to work together with them. We don’t need to do any name-calling.”

Maricopa County’s top election official, Recorder Stephen Richer, a Republican first elected in November, noted some of the more outrageous allegations while speaking Monday night at the board meeting.

Richer went to say he was tired of being silent when honest county employees who work for him have been maligned.

“I didn’t want to get involved. I wanted to sit quietly on the sidelines, but it is enough,” Richer said. “I am now the leader of an office of 160 full-time employees, and I am tired of hearing them defamed and ridiculed.”

The allegation of deleted election-related information is among the most contentious accusations. Auditors and senators alleged the deletion, but not the tales of South Korea and other matters Richer mentioned.

Ben Cotton, founder of Cyber Ninjas subcontractor CyFIR, told senators Tuesday night that he managed to locate files and that they certainly had been deleted.

“I discovered a [master file table] that clearly indicated the database entry was deleted from that server,” Cotton said. “All of this, however, may be a moot point because subsequently I’ve been able to recover all of those files and I have access to that data. … I have the information I need from the recovery of the data.”

Richer said at the county board meeting Monday night that he was troubled by Republican support for the audit, but blamed Cyber Ninjas and its CEO, Logan—who reportedly had deleted a tweet claiming Trump won the presidential election.

“Many of the people participating in the audit are my friends. They are good people. People who likely want to help our democracy,” Richer said, adding:

I hope they will remain my friends. I’ll say the same of Senate audit liaison Ken Bennett. He is a good man who approached us with good intentions. But they are led by the Cyber Ninjas, the company that nobody has ever heard of with a CEO who has indulged even the craziest election conspiracy theories involving [former Venezuelan dictator] Hugo Chavez.

During the Senate session the next day, Fann expressed a similar sentiment.

“I’m so saddened by the Board of Supervisors yesterday, some of the hurtful comments [that] were made, which is sad,” the Arizona Senate president said. “These guys have been my friends, some of them for 20 years. This is not personal. This is about our jobs as elected officials.”