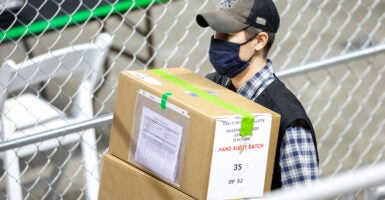 A foe of former President Donald Trump is leading the Biden Justice Department’s push to discredit or halt an election audit in Arizona’s largest county—an issue that is heating up this week.

The Maricopa County Board of Supervisors, which governs the county of over 4 million, is scheduled to meet Monday to discuss the issue. The Republican-controlled state Senate has asked county officials to address these matters at a hearing Tuesday.

Some state senators are reported to have concerns about the county’s noncompliance with legislative subpoenas, questions about the chain of custody for ballots, and evidence of database files being removed from a computer used to manage elections.

The Republican chairman of the county’s Board of Supervisors has said these are false allegations.

The results in Arizona were among the narrowest of state outcomes in the November election. Because of its size, Maricopa County was key to Biden’s margin of victory over Trump, who had narrowly carried the county in 2016.

The audit in Maricopa is to reevaluate 2.1 million ballots. The county’s Election Department describes Maricopa as the nation’s second-largest voting jurisdiction.

At most, the election audit could change the winner of Arizona, but it would not change the national outcome since Biden would retain enough electoral votes to win the presidency.

‘Don’t Even Want to Be Around Themselves’

Karlan, a former Stanford University law professor, has been active in left-leaning politics. She was a witness before the House Judiciary Committee in 2019 to advocate Trump’s impeachment. Karlan also is a former member of Facebook’s oversight board.

“She is skilled at leveraging her political ideology into government action,” J. Christian Adams, himself a former Justice Department lawyer, told The Daily Signal. “For the Biden administration, that is a feature, not a glitch.”

Karlan made news during her impeachment testimony by bringing up Trump’s youngest son, then 13.

“The Constitution says there can be no titles of nobility,” Karlan told the Judiciary Committee. “So, while the president can name his son Barron, he cannot make him a baron.”

Karlan has donated thousands of dollars to Democratic politicians.

During the 2019 impeachment hearing, she confirmed having previously said: “Liberals tend to cluster more. Conservatives, especially very conservative people, tend to spread out more perhaps because they don’t even want to be around themselves.”

In December 2016, weeks before Trump took office, Karlan argued that that the president-elect’s business ties made him prima facie impeachable.

“Nearly every president has probably done something that a court has later held unconstitutional or contrary to law,” Karlan told the San Francisco Chronicle. “But I can’t think of one who had such an across-the-board combination of ignorance, indifference, and defiance.”

The Daily Signal sought comment Friday from the Justice Department about Karlan and the Arizona election audit. In an email, a spokesperson responded, “No comment.”

In May 2020, Facebook appointed Karlan to its oversight board, which is empowered to make a final call about what content is permissible on the social media platform. She no longer was on the board when it made its recent decision to uphold Facebook’s indefinite ban of Trump.

Election audits are not new, and Adams contends that Karlan likely knows that the Maricopa ballots are secure from theft or tampering.

“She doesn’t want anyone talking about election irregularities,” said Adams, now president of Public Interest Legal Foundation, a watchdog of election integrity. “She just wants to stamp out all dissent.”

In a 2009 article in the Duke Journal of Constitutional Law & Public Policy, Karlan wrote that for five of its eight years, the George W. Bush administration “brought no Voting Rights Act cases of its own except for one case protecting white voters.”

Her claim was incorrect and editors of Duke University’s law journal said Karlan should correct it, but she did not, Adams noted in a letter to Arizona state Senate President Karen Fann.

Karlan “did her best to try to overturn the voter fraud convictions of individuals who tried to defraud black voters in an election in Greene County, Alabama in 1994,” Adams and Riordan wrote, adding: “Fortunately for the minority voters of Greene County, she was unsuccessful.”

Many of Karlan’s objections to Arizona’s election audit are based on the state Senate’s hiring of Cyber Ninjas, a cybersecurity firm, to conduct the audit.

In a letter earlier this month to Fann, the Senate president, Karlan wrote:

The first issue relates to a number of reports suggesting that the ballots, elections systems, and election materials that are the subject of the Maricopa County audit are no longer under the ultimate control of state and local elections officials, are not being adequately safeguarded by contractors at an insecure facility, and are at risk of being lost, stolen, altered, compromised or destroyed.

Federal law creates a duty to safeguard and preserve federal election records. … If the state designates some other custodian for such election records, then the Civil Rights Act provides that the ‘duty to retain and preserve any record or paper so deposited shall devolve upon such custodian.’ 52 U.S.C. § 20701. The [Justice] Department interprets the act to require that ‘covered election documentation be retained either physically by election officials themselves, or under their direct administrative supervision.’

Opponents of the Maricopa election audit have argued that Cyber Ninjas lacks both transparency and experience with elections.

Karlan also inquired about the possibility of voter intimidation by Cyber Ninjas, writing to the Arizona Senate president:

Among other things, the statement of work indicates that the contractor has been working ‘with a number of individuals’ to ‘identify voter registrations that did not make sense, and then knock on doors to confirm if valid voters actually lived at the stated address.’  … This description of the proposed work of the audit raises concerns regarding potential intimidation of voters. The department enforces a number of federal statutes that prohibit intimidation of persons for voting or attempting to vote.

Government working with a private contractor is not unusual in election administration, whether to print ballots or conduct an audit, said Hans von Spakovsky, a former Justice Department lawyer who is a senior legal fellow at The Heritage Foundation.

“She is abusing her power in law enforcement for political reasons,” von Spakovsky told The Daily Signal, which is Heritage’s multimedia news organization.

“She didn’t have to be nominated or confirmed [by the U.S. Senate],” von Spakovsky said of Karlan and her Justice Department post. “She’s a Democratic activist. That’s why she’s in the Civil Rights Division, because it has so much authority over elections.”

Karlan’s stated concerns about voter intimidation make little sense and are an attempt to “intimidate,” Public Interest Legal Foundation’s Adams and Riordan wrote in their own letter to the Arizona Senate president.

“Here, the voters have long since voted—the act of voting was months ago,” the two lawyers wrote. “It is not possible that Section 11(b) can be implicated by the audit. Karlan is offering an absurd and implausible interpretation of Section 11(b) of the Voting Rights Act—one intended to intimidate you—that no court could possibly uphold as correct.”

Fann, a Republican who represents Prescott, Arizona, responded to Karlan in a letter asserting that the ballots are secure and that the Arizona Senate indefinitely has deferred plans to contact voters directly.

Security is tight at Arizona’s state fairgrounds, where the audit is being conducted, she said in the letter, asserting that “not a single ballot has been destroyed, defaced, lost or adulterated”—and that none would be.

In December, a state judge upheld the Arizona Senate’s authority to subpoena information from Maricopa County, the Associated Press reported.

Fann, as Senate president, has defended the election audit against critics who called for shutting it down.

On Wednesday, Fann sent a letter to the Maricopa County Board of Supervisors regarding “serious issues” arising from the audit. She wrote that county officials “refused to produce virtual images of [internet data] routers used in connection with the general election.”

On Thursday, Board of Supervisors Chairman Jack Sellers called Fann’s letter “lies,” “half-truths,” and “threats” in a written statement in which he announced a public meeting Monday to address the issues.

The five-member board is comprised of four Republicans and one Democrat.

Sellers, a Republican who became chairman in January, also demanded a retraction from any media outlet that reported allegations of irregularities with the count.

“After reviewing the letter with county election and IT experts, I can say the allegations are false and ill-informed,” Sellers said in his public statement. “Moreover, the claim that our employees deleted election files is outrageous and completely baseless and beneath the dignity of the Arizona Senate.”

Spokespersons for Arizona Senate Republicans and Maricopa County officials did not respond to inquiries from The Daily Signal.

If county election officials resist subpoenas approved by a judge, they could be held in contempt, von Spakovsky told The Daily Signal.

“The issues raised in opposition to the audit are not legitimate,” von Spakovsky said. “It’s not unusual to have an audit conducted of government agencies or most companies and businesses in the United States. There is no reason to oppose it. It makes you wonder what they might find.”