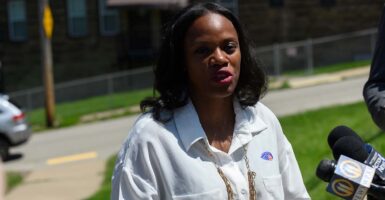 While most progressive candidates lost to an incumbent in this year’s Democratic primaries, progressives won over half of the open-seat races.

One study found that progressive candidates received many high-profile endorsements, including from Sen. Bernie Sanders (I-Vt.) or Rep. Alexandria Ocasio-Cortez (D-N.Y.). They also enjoyed support from one or more of the following groups: Indivisible, Justice Democrats, Our Revolution, Sunrise Movement, or The Progressive Change Campaign Committee (PCCC).

Here are 10 progressive-backed candidates to look out for in Tuesday’s midterm elections:

Jamie McLeod-Skinner was the only progressive-backed candidate out of 11 to beat an incumbent in this year’s Democratic primaries.

McLeod-Skinner defeated the seven-term incumbent Rep. Kurt Schrader, who was endorsed by President Biden, in the Democratic primary for Oregon’s 5th Congressional District.

McLeod-Skinner’s policy priorities include affordable housing, protecting rural economies from corporate take-over, and lowering health care costs. Her campaign website says she has also been endorsed by Planned Parenthood Action Fund and will “will take on extremists like [her] opponent who would ban access to abortion, even before a woman knows she’s pregnant — and keep government out of our personal medical decisions.”

She is running against Republican candidate Lori Chavez-DeRemer in Tuesday’s general election. McLeod-Skinner did not respond to The Daily Signal’s request for comment by publication.

“As the first generation-z member of Congress, from day one, I will fight to end gun violence, win Medicare For All, transform our racist criminal justice system, and end the climate crisis,” Frost states on his campaign website.

Frost did not respond to The Daily Signal’s request for comment by publication.

Progressive-backed Jonathan Jackson, son of Rev. Jesse Jackson, won the Democratic primary in Illinois’ First Congressional District, which includes much of the South Side of Chicago. Jackson’s victory comes after the district’s 15-term Democratic representative, Bobby Rush, announced his retirement in January.

Jackson will face Republican Army veteran Eric Carlson in the general elections this Tuesday. Jackson did not respond to The Daily Signal’s request for comment.

LGBTQ+ rights are among Ramirez’s policy goals. According to her campaign website, “She will support and fight for the Equality Act to fully guarantee nondiscrimination protections for the LGBTQ+ community throughout the United States including in housing, employment, education, and federally funded programs.”

“I believe our district deserves a representative that wants to see more opportunity here, a Congressperson that fights for us and not against us,” McCallian said. “It is an honor to provide a choice to voters in this election, regardless of party.”

“People of the 8th should vote for me if they are ready for someone who will direct our tax dollars back into our district to invest in our local infrastructure and economy, for investment in jobs, healthcare, and educational opportunities,” she added. “My policies are those that the majority of Americans want: to end corporate greed in our government, to bring manufacturing jobs back, and to improve healthcare. A major reason for the inflation of gas and food prices is due to corporate greed and my policy stance is to protect Americans from corporate price gouging.”

Not only must we end racist voter ID and suppression laws, restore the full power of the Voting Rights Act, and end gerrymandering, but we must go farther and provide every person in our country with the right to vote – from previously incarcerated people to immigrants, everyone deserves a voice in our democracy.

She also aims to “ward off a right-wing Supreme Court that could poke holes in LGBTQ rights based on ‘religious liberty,’ and address the many disparities that the LGBTQ+ community faces in affordable, inclusive health care.”

Texas State Rep. Jasmine Crockett, a Democrat who represents Dallas County, stepped up as the Democratic nominee for Texas’s 30th Congressional District this May, after U.S. Rep. Eddie Bernice Johnson announced her retirement.

Crockett did not respond to The Daily Signal’s request for comment.

Among Casar’s policy priorities are Medicare for All, tuition-free higher education, and the legalization of marijuana.

Casar’s other policy goals, as stated on his website, include increasing access to abortion in Texas. Casar previously passed amendments to fund abortion travel costs in The Lone Star State. His campaign website states he “is dedicated to increasing access to reproductive health care, repealing the Hyde Amendment, and codifying Roe v. Wade through the Women’s Health [Protection] Act.”

“Together, we’re taking our fight to the halls of Congress — to fight and deliver on passing Medicare for All, protecting reproductive rights, creating good jobs and fixing our power grid,” Casar said to at a viewing party in March. “Progressive policies are popular, and we’re going to pass them for Texas working families,” he added.

Vermont state Senate President and Majority Leader Becca Balint won the Democratic primary for Vermont’s At-Large Congressional District in August. Sen. Bernie Sanders and Our Revolution are among the progressives backing her in the midterm elections.

Sen. Balint’s previous initiatives in Vermont include banning “conversion therapy” for LGBT youth and backing a transgender bathroom bill in the senate. Her current goals include supporting the federal Equality Act, codifying abortion into federal law, and supporting a Green New Deal to fight climate change.

“Growing up, I didn’t see a lot of politicians who looked like me or shared my experience … I don’t fit the bill of what a normal politician looks like,” Barnes said at his August victory party.

“We need more real people in the United States Senate,” he said, adding that Sen. Johnson is a “self-serving, out-of-touch politician” who “continues to stack the deck against us” and “wants to take us backwards.”

Barnes did not respond to The Daily Signal’s request for comment.

This is a breaking story and will be updated as election results come in.