This Is Not Your Father’s Normal Democratic Party 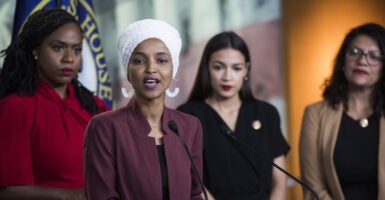 The Democratic Party’s so-called moderates have had it with Reps. Alexandria Ocasio-Cortez, D-N.Y.; Ilhan Omar, D-Minn.; Rashida Tlaib, D-Mich.; and other members of the “squad.” These “centrists” are laboring to separate themselves semantically from these neo-Marxists, although their differences end there.

These “middle of the road” Democrats call themselves “normal.” If they keep parroting that word, their feathers will turn green.

When these allegedly moderate Democrats call themselves “normal,” this suggests that those further left are abnormal. How insulting! The squad should demand an immediate apology. Indeed, it is the Democrats’ new normal.

Good luck finding them there.

“Normal” Democrats who loudly claim to be in the middle are on the left—often deeply so.

Lamb, for starters, has a 9.04 lifetime American Conservative Union rating—24.96 points from the centrist border.

The aforementioned McEachin clocks in at 5.68. Spanberger? 10.53. Weinberg votes conservatively 1.98% of the time.

“The data speak for themselves,” American Conservative Union Chairman Matt Schlapp told me. “The most radical elements of the left have hijacked the Democrat Party.”

Moderate Democrats are now mythical creatures, like dragons and unicorns. Nothing remains but leftists and far leftists. Your father’s normal Democrat Party is far, far away.