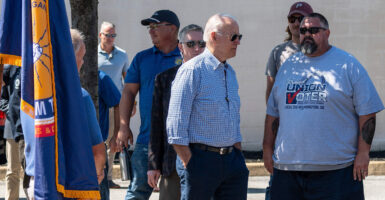 A provision in Democrats’ $1.7 trillion social welfare spending bill could be used to encourage political donations to Democratic candidates, critics of the provision say.

The newest version of the bill allows for a $250 tax credit for employees in unionized workplaces to pay “full” union dues. The tax credit would not go to union members who opt out of paying the portion of dues that goes toward supporting unions’ political causes and campaign contributions.

About 95% of union political donations support liberal candidates—almost all of them Democrats—and causes.

The tax credit has an “insidious design” to boost union membership, said Mark Mix, president of the National Right to Work Committee.

“Taxpayers foot the bill for the first $250 of union dues,” Mix told The Daily Signal. “If you look at the ‘Build Back Big Labor’ bill, there are a lot of tidbits delivering for union officials, not necessarily front-line workers.”

Court precedent allows workers in the 23 states that allow compulsory union membership to withhold a portion of their mandatory membership dues if it’s used for nonessential activities they object to, which includes politics. Those employees still have to pay for core union functions.

The tax credit would be a financial disincentive for employees in the 23 states without right-to-work laws to withhold money used for political dues, said F. Vincent Vernuccio, president of the Institute for the American Worker, which opposes compulsory union membership.

“You don’t have to pay the full union dues in the 23 states, but you can pay what are called ‘agency fees,’” Vernuccio told The Daily Signal. “Only allowing the tax credit for full union dues is clearly an incentive for union politics.”

Over the course of negotiations between far-left Democrats in Congress and the more traditional wing of the party, the union dues provision was dropped. But even as the social welfare spending bill dubbed “Build Back Better” was whittled down from $3.5 trillion to $1.7 trillion, House Democrats restored that provision.

“This is a 2,000-page piece of legislation, and the provision for union dues is just one page, and is clearly meant to incentivize membership because this administration knows that the Democrats’ strongest political backers have been unions,” Max Nelson, director of labor policy at the Freedom Foundation, which opposes compulsory membership, told The Daily Signal.

“The tax credit allows a union organizer to tell someone you won’t save anything by withholding dues, so you might as well be a member in good standing,” Nelson explained. “It changes the calculus.”

Late Friday, the Democrat-controlled House passed a $1.2 trillion infrastructure bill, with six Democrats voting against it and 13 Republicans voting for it. In a party-line vote that same night, Democrats backed a House rule to pave the way for a future vote on the $1.7 trillion social spending bill.

The bill would make the union dues credit an “above the line” deduction, which would be an expense taken from the calculated adjusted gross income. That differs from itemized deductions. Before the 2017 tax reform bill that lowered rates and closed loopholes, union dues were an itemized deduction.

The House Ways and Means Committee first approved the measure as part of the bill in September. Earlier this year, Senate Democrats backed a bill called the Tax Fairness for Workers Act to make union dues an “above the line” tax deduction, which garnered union support.

“Restoring tax deductions for unreimbursed employee expenses and union dues is an important step towards undoing the damage that President [Donald] Trump and Republicans in Congress did when they passed legislation that gave massive tax cuts to corporations while eliminating provisions that help working families,” Chris Shelton, president of the Communications Workers of America, said in a statement in April about the Senate bill.

United Steelworkers International President Tom Conway said of the April bill: “Our tax system must support workers and their families, not just corporations and the ultra-rich. Unfortunately, the Trump tax plan stripped workers of a long-standing deduction that helped ensure balance.”

Unions likely pressured Democratic lawmakers into restoring the provision to the $1.7 trillion social welfare spending legislation, said Rachel Greszler, a research fellow in economics at The Heritage Foundation, the parent organization of The Daily Signal.

“The problem is, this uses taxpayer dollars to fund politics,” Greszler said. “A lot of union leaders have become more about politics than they are about workers.”