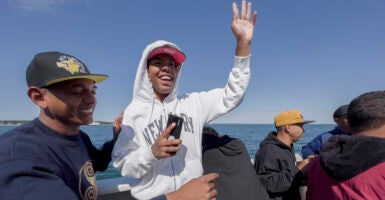 Two days after about 50 illegal aliens from Venezuela arrived on Martha's Vineyard, a government release said Massachusetts state authorities would transport the migrants off the island to a shelter at Joint Base Cape Cod. Pictured: Rafael Eduardo, center, and dozens of other illegal immigrants are transported by boat Sept. 16 off Martha's Vineyard. (Photo: Dominic Chavez/The Washington Post/Getty Images)

Immediately after the arrival of about 50 illegal immigrants from Venezuela, Martha’s Vineyard officials pushed a public image of a humanitarian response from the affluent island resort off the coast of Massachusetts.

However, internal emails reveal officials’ intent to ship the migrants off the island to a military base on the mainland shortly as soon as possible.

Many press releases touted local leaders as providing humanitarian assistance to the migrants, who were flown to Martha’s Vineyard Sept. 14 at the behest of Florida Gov. Ron DeSantis.

The Republican governor arranged the flight to draw attention to President Joe Biden’s policies allowing hundreds of thousands of illegal aliens to cross from Mexico into the U.S.

“[T]here is the increasing likelihood that the longer-term arrangement will involve moving the group off-Island to a location (e.g., Joint Base Cape Cod) better suited for interim housing and other supports,” Cynthia Mitchell, CEO of Island Health Care in the island town of Edgartown, wrote in an email to staff Sept. 15, the day after the migrants arrived.

That same day, Dukes County Emergency Management, an agency in West Tisbury on the island, issued a press release stressing the “humanitarian response”:

We continue to provide shelter, food, and care to migrants that arrived on the Island yesterday and are grateful to the many individuals and organizations who have reached out to offer their support. At this time, physical donations of clothing, etc. may be dropped off via a Dropbox located at the Edgartown Fire/EMS Station … .

As you all may know by now, late yesterday the governor of Florida arranged for two private charter jets to drop off a group of Venezuelan immigrants at the MV [Martha’s Vineyard] airport, and also arranged for vans to take them to MV Community Services where, they were told, they would be connected to jobs and housing.  …

A local incident command center of law enforcement and emergency management officials has been set up, and coordination efforts with state and federal agencies are now underway. I’ve heard from some of you already, wondering what you [or Island Health Care] can do to help—as of this moment, we are standing by as 1.) short-term support and care are in place (two churches and the Y), and 2.) there is the increasing likelihood that the longer-term arrangement will involve moving the group off-Island to a location (e.g., Joint Base Cape Cod) better suited for interim housing and other supports.

One resident sent an email to Geoff Freeman, director of the Martha’s Vineyard Airport.

Shelley Corwin, identified as the author of the email, asked Freeman: “Why hasn’t the airport refused landing to the dirty work of de Santiago? And pre-notification of that???”

“De Santiago” apparently was a derogatory reference to DeSantis, Florida’s governor, who sent the illegal immigrants to Martha’s Vineyard.

No record was made available to indicate that Freeman responded.

The Daily Signal previously reported that the Biden administration has arranged flights for illegal immigrants from cities and towns along the U.S.-Mexico border, often to other conservative, or red, states.

On Sept. 20, DeSantis was critical of outrage expressed by activists on the Left about his transport of illegal immigrants to Martha’s Vineyard.

“So when Biden is flying these people all over the fruited plain in the middle of the night, I didn’t hear a peep out of those people,” DeSantis said. “I haven’t heard a peep about all the people that have been told by Biden [that migrants] can just come in. And they’re going, they’re being abused by the cartels. They’re drowning in the Rio Grande. You had 50 that died in some shed in Texas. I heard no outrage about any of that.”

Freeman, the airport director, fielded numerous inquiries from local media, including The Boston Globe and Boston-based public radio station WBUR-FM, as well as national media outlets such as The Washington Post and NBC News.

In an email responding to a Boston Globe reporter’s inquiry, Freeman wrote: “I spoke with the Globe already. The airport did not know of the event [until] after it happened[;] there was no prior information to us or island agencies.”

Dukes County, which includes the towns on Martha’s Vineyard, issued a press release Sept. 16 noting the “humanitarian response” of the island community to the arrival of the 50 migrants from Venezuela.

“Shortly after the arrival of these individuals, Martha’s Vineyard residents joined with local and state officials to create temporary shelter and provide necessities in a moment of urgent need,” the county government’s release said.

Without acknowledging that communities along the U.S.-Mexico border lack resources to deal with the inflow of illegal immigrants allowed by the Biden administration, the release states: “However, the island communities are not equipped to provide sustainable accommodation, and state officials developed a plan to deliver a comprehensive humanitarian response.”

Neither Island Health Care’s Mitchell nor Dukes County Emergency Management responded to The Daily Signal’s inquiries for this report.

However, in what appeared to be an autoreply, The Daily Signal received a message from the emergency management agency that says: “We greatly appreciate the generous outpouring of support and willingness to help that was shown this past week from our local and neighboring community. At this time we no longer need local donations nor volunteers for the humanitarian situation involving Venezuelan migrants on Martha’s Vineyard.”

The words “this past week” appear to be an outdated reference to the illegal aliens’ presence on the island for several days in September.

The Dukes County press release says that on Sept. 16, two days after the migrants’ arrival, Massachusetts state authorities would transport them to a new, temporary shelter at Joint Base Cape Cod, a large military base on the mainland.

The county’s release goes on to quote state officials, including the governor of Massachusetts.

“We are grateful to the providers, volunteers and local officials that stepped up on Martha’s Vineyard over the past few days to provide immediate services to these individuals,” Gov. Charlie Baker, a Republican, is quoted as saying. “Our administration has been working across state government to develop a plan to ensure these individuals will have access to the services they need going forward, and Joint Base Cape Cod is well equipped to serve these needs.”