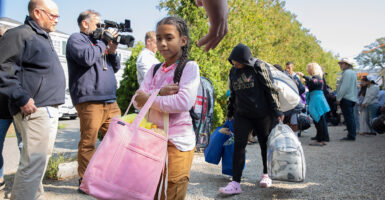 Illegal immigrants from Venezuela board a bus Sept. 16 to be transported off Martha’s Vineyard after being flown there by order of Florida's governor. (Photo: Dominic Chavez for The Washington Post/Getty Images)

“We don’t have the services to take care of 50 immigrants, and we certainly don’t have housing.”

These remarks were made by a Martha’s Vineyard local after 50 illegal migrants arrived last week on the resort island off the coast of Massachusetts.

The average price for a house on Martha’s Vineyard is around $1.3 million, according to Zillow. In the border community of Eagle Pass, Texas, which often receives hundreds of illegal immigrants every day, however, home prices average about $186,000.

The swirl of media attention over the decision by Florida Gov. Ron DeSantis, a Republican, to have the 50 illegal migrants flown to the island resort once again highlighted the reality of President Joe Biden’s border crisis. Also in view: Democrats’ failure to recognize the severity of the situation.

For months, communities along the U.S.-Mexico border have asked Biden to take action to stop the flood of illegal immigrants into America.

Local leaders in places such as Kinney County, Texas, say they don’t have the resources to accommodate the thousands of migrants coming into their communities.

“If we keep our open border, we’re not going to have a nation,” Kinney County Judge Tully Shahan said in July, when several Texas counties declared that they were being invaded by illegal aliens.

The Biden administration has continued to deny the border crisis, with officials such as Vice President Kamala Harris and Homeland Security Secretary Alejandro Mayorkas making the claim that the border is secure.

A “process [is] in place” to “manage” illegal immigration, Biden said last week in a speech at the 45th annual galas held by the Congressional Hispanic Caucus Institute.

U.S. Customs & Border Protection recently reported that its agents encountered more than 2 million migrants during the current fiscal year, which ends Sept. 30. The “process” that Biden says is in place is broken, many observers say.

On today’s episode of the “Problematic Women” podcast, we discuss the reality of the crisis at the southern border.

Also on today’s show, we discuss another reality: In some states across America, animals and their unborn young are more protected than unborn human babies. We’ll tell you where, and also share some exciting pro-life news out of Pennsylvania.

Plus, in honor of the first day of autumn, we share some of our favorite fall traditions. And of course, we’ll crown our Problematic Woman of the Week.