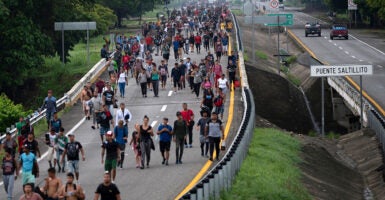 Local leaders in Kinney County, Texas, and elsewhere in the state have declared they are under an invasion from illegal immigrants streaming across the border into their communities. Pictured: Migrants taking part in a caravan head to the U.S. border on June 9. (Photo: Pedro Pardo/ AFP/Getty Images)

The flood of illegal migrants coming across the border has gone from an emergency to an invasion, local Texas officials say.

Leaders from Kinney County, which borders Mexico, and from several other Texas counties gathered Tuesday to declare they are under invasion.

“If we keep our open border, we’re not going to have a nation,” Tully Shahan, a Kinney County judge, said at a press conference, held at the Kinney County Civic Center in Brackettville, Texas.

“We don’t believe we’re going to get any help from the Biden administration,” he said. “They’re not going to do anything. So, we felt like we should go out and declare, ‘We’re being invaded’—which we are.”

The number of migrants that the Border Patrol has encountered this year has been growing steadily. In January, there were more than 154,000 migrant encounters, according to Customs and Border Protection. That number jumped to more than 239,000 in May. And those numbers don’t include so-called got-aways, who eluded detection or capture.

In the current fiscal year (which began on Oct. 1) alone, there have already been 1.5 million apprehensions at the border, said Mark Morgan, former acting commissioner of the U.S. Customs and Border Protection and a visiting fellow at The Heritage Foundation, at the press conference. (The Daily Signal is the news outlet of The Heritage Foundation.)

Leaders in Kinney County and others are pointing to language from Articles I and IV of the U.S. Constitution as reason why they’re declaring themselves to be under invasion.

“Article I grants the states the power, if the federal government doesn’t act, to take matters into their own hands to protect their citizens,” said Brent Smith, Kinney County attorney.

About a dozen local Texas leaders delivered remarks to the press, detailing the ways the number of illegal immigrants crossing the southern border are affecting their communities.

Thaddeus Cleveland served as a Border Patrol agent for 26 years until he retired in April. He now serves as sheriff of Terrell County, about 270 miles west of San Antonio. Terrell County doesn’t border Mexico, but the sheriff says the number of illegal immigrants entering his county are drawing resources away from legal residents.

The crisis at the border is a “fixable problem,” Cleveland said.

“It could be fixed up in the Beltway,” he said, referring to Washington, D.C., but “they don’t want to fix the problem.”

In 2021, Kinney County Sheriff Brad Coe said, 1,121 illegal immigrants were caught being smuggled through the county.

Don McLaughlin, mayor of Uvalde, Texas, about 65 miles from the Mexico border, called the situation in his county a “nightmare.”

Sheriff Roy Boyd of Goliad County, 100 miles south of San Antonio, described one aspect of the “nightmare” he has faced in his community in light of the swarms of illegal immigrants coming across the border.

We deal with this every day in our counties. These individuals that are being brought to us, coming to our county, we’re intercepting. They are not free to go.

They’re the property of the cartels who get them to Houston and then move them around the country, where they have to work off their indebtedness to the cartel one way or another, whether that be unloading drugs, selling drugs, working in restaurants, working in hotels, or whether it be forced prostitution all across the United States of America.

These individuals are not free. We’re importing a peon class, and we are allowing the cartels to do it. It is an invasion that is being pushed by the cartels into our country, and it must come to a stop.

“Would you recognize an invasion,” Roy said, “an invasion of the state of Texas that is undermining our security, risking the health and well-being of Texans, allowing fentanyl to pour into our schools and communities, for Texans to die, allowing our ranches to get run over, empowering cartels who are well-armed along the border with their tentacles reaching into Texas.

The decision of Kinney County to declare that it is under invasion is a historic one. Tuesday marked the first day in American history that a “legal authority … found as a matter of law that the United States is being invaded,” Ken Cuccinelli, the former attorney general of Virginia and a senior fellow at the Center for Renewing America, told reporters.

Now, Texas Gov. Greg Abbott has the opportunity to declare that the state of Texas is under invasion, which would allow the state to block individuals from coming across the border illegally.

“What I’ve heard here consistently,” Cuccinelli said, “whether it’s the sheriffs, the judges, the mayors, county attorney, is the desperation, the desperation of communities on the front line of establishing and maintaining America’s sovereignty because the federal government isn’t doing it.”