Like FDR’s New Deal, Biden’s Tax-and-Spend Policies Have Been an Economic Wrecking Ball 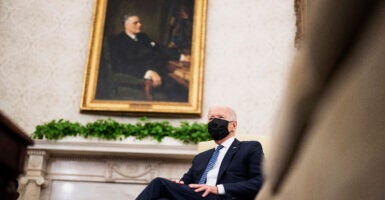 President Joe Biden sits underneath a portrait of former President Franklin D. Roosevelt in the Oval Office at the White House on Sept. 1, 2021. Some Democrats have likened Biden's economic policies to those of FDR, but that's not the compliment they think it is. (Photo: Doug Mills//Getty Images)

The economic gaslighting coming out of Washington is astounding, even by D.C. standards.

The unprecedented interventions of the New Deal included wage and price controls, so-called jobs programs, and a tripling of taxes to fund bloated government budgets. Far from ending the Great Depression, the New Deal prolonged it and created several bouts of inflation in the 1930s.

McAuliffe’s comparison of Biden to FDR is right, however, though for the wrong reason.

Both presidents initiated massive interventions in the economy, and neither improved economic outcomes. Far from an accomplishment, handling the economy like FDR is a sign of failure.

The numbers prove Biden’s policies have made people’s lives and livelihoods worse.

Massive federal deficits, funded by the Federal Reserve, have caused skyrocketing inflation under Biden, who took office when inflation was only 1.4% and real wages were rising. In just 18 months, Biden managed to push inflation to over 9% and prices were rising nearly as fast in a single month as they did in the entire year before Biden took office.

The prices that businesses pay have risen even faster than prices for consumers. This wholesale inflation hit 13 new record highs under Biden and has been stuck in double digits for more than a third of Biden’s presidency.

Inflation has not gotten better under Biden, but far worse. It has not been this bad in more than 40 years.

The idea that Biden’s agenda somehow saved a stalled economy is also fallacious. Biden inherited an economy growing at a $1.5 trillion annualized rate. In only a year, the administration’s policies have caused the economy to shrink, contracting in the first six months of this year.

The slowdown has not been limited to economic growth, either.

The labor market was in a robust recovery when Biden took office, but shortly thereafter, the American Rescue Plan was rammed through Congress. Job growth slowed dramatically in the wake of that excess spending, with average monthly job gains being cut in half.

The recovery under President Donald Trump added more jobs in less time than under Biden.

The nationwide impacts of Biden’s economic agenda have clearly been negative, but the individual impacts have been devastating for the average American. The average worker has seen prices rise so much faster than wages that it has been the equivalent of a 5.5% pay cut since Biden took office. That may not sound like much, but it adds up to more than  $3,000 a year in lost income.

To add insult to injury, interest rates are rising fast, and that increases borrowing costs on everything from credit cards to mortgages. On average, higher rates today compared with when Biden became president are costing an average of $1,200 per year. For a typical family with both parents working and both earning the average income, they are effectively $7,200 poorer than 21 months ago.

Many people are even worse off than the average. Consider the mortgage on a median-priced home: That mortgage has gotten 80% more expensive since Biden took office, costing an additional $10,000 a year and an additional $300,000 over the course of the loan. It’s no wonder that homeownership affordability has plummeted more than 35% under Biden.

Even those with savings instead of debt have gotten crushed under the weight of Biden’s policies. The average 401(k) has lost $34,000 this year, or about 25%. Those nearing retirement are faced with the stark reality that they likely cannot retire anytime soon.

Far from saving the economy, the Biden administration’s policies have demonstrably slowed the recovery and then pushed it in reverse.

The economy was returning to pre-pandemic levels at an accelerating pace before Biden’s American Rescue Plan was passed, but then it slowed considerably.

The Biden administration was not handed an economic mess, but it created one. It did not save the economy, but sent it into a stall. It has not made people’s lives better, but made them demonstrably worse. The numbers prove it.