Lawmakers Want to Know Why Pennsylvania Sent Out 240,000 Unverified Ballots 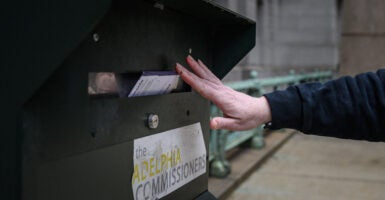 “That is an enormous number of ballots, which, according to the law, must be set aside and not counted for the 2022 General Election unless the voter produces lD,” 15 state lawmakers tell Pennsylvania's election office. Pictured: A voter casts a ballot Monday at a mail drop box outside Philadelphia City Hall. (Photo: Ed Jones/ AFP/Getty Images)

Almost a quarter of a million ballots were mailed to Pennsylvania voters without verifying their identity, state lawmakers say in a letter seeking answers from the state’s top election official.

“According to the data, as of Oct. 21, 2022, a staggering 240,000 ballots are ‘NOT VERIFIED,’” 15 Republicans in the Pennsylvania House of Representatives write Tuesday in the letter to acting Secretary of the Commonwealth Leigh Chapman.

“That is an enormous number of ballots, which, according to the law, must be set aside and not counted for the 2022 General Election unless the voter produces lD,” the lawmakers write.

State Rep. Frank Ryan, a member of the House State Government Committee, led the letter. It cites data on unverified ballots for the Nov. 8 election produced by the Pennsylvania Department of State, which Chapman heads.

Ryan and the 14 other GOP lawmakers add:

This will force the counties to, as one county election director described it, ‘go after the missing information’ to obtain proof of lD for the unverified ballots. What level of additional staffing is allocated for counties to attempt to contact and verify the identity of these quarter of a million of ballot recipients? Many of these unverified ballots are likely the result of transposition of numbers or letters but the purpose of the law is to ensure integrity. The law requires matching therefore all must be set aside and lD verified prior to being counted.

Chapman’s office didn’t respond immediately to The Daily Signal’s request for comment on this report.

The state lawmakers’ letter says the problem stems from a 2018 directive from her office “instructing counties to register voters without verification of identity.”

Ryan told The Daily Signal that a 2019 state audit found that the secretary of the commonwealth’s office was uncooperative and had an unreliable system for keeping election records under its Statewide Uniform Registry of Electors system, or SURE.

“All we are trying to do is get ahead of the balloting process this year,” Ryan said in a phone interview. “We are letting the [Pennsylvania] Department of State know we can minimize the number of challenges and fix this before the election.”

Ryan stressed that the issue isn’t about the outcome of elections.

“No one is saying this determines who wins and loses,” Ryan said. “We are just saying the database is so broken it needs to be fixed.”

The letter notes that during a Sept. 14 hearing by the Pennsylvania House State Government Committee, Ryan asked Jonathan Marks, deputy secretary for elections and commissions, to explain why the secretary’s office made so many requests to the Social Security Administration’s Help America Vote Verification system.

Marks responded that it was to verify information on applications for mail-in ballots. He told the committee that if someone submits invalid identification, the counties still must send a mail-in ballot to that requester.

During the hearing, Marks stressed the difference between voter registration and voting.

“[In] voter registration, there is no federal requirement or state requirement that those numbers match or that every voter has to have one of those two numbers,” Marks told the Pennsylvania House committee, referring to either a state Transportation Department ID number or the last four digits of a Social Security number.

“With mail-in balloting, it is a requirement,” Marks said. “lf when you apply, your PennDOT lD cannot be verified or your last four of SSN cannot be verified, the county can still issue the ballot, but the ballot doesn’t count unless the voter provides a valid form of lD.”

However, the lawmakers’ letter notes, the Pennsylvania Department of State contradicted Marks when it issued guidance on Sept. 26 for examining return envelopes for absentee ballots. That guidance tells counties that verification of who a voter is must happen before they send such ballots to an applicant.

“Before sending the ballot to the applicant, the county board of elections confirms the qualifications of the applicant by verifying the proof of identification,” the state guidance says.

The total of 240,000 unverified ballots stands as of Oct. 21 data, the GOP lawmakers say in their letter. They ask the secretary’s office to issue a clarification to county election offices and to provide a list of applicants who requested mail-in ballots.

“Due to the conflicting information provided by your deportment,” Ryan and the other lawmakers write to Chapman, “counties should be required to certify that all of these ballots have been set aside and make a record of the type of identification produced by the voter who previously provided non-matching ID.”