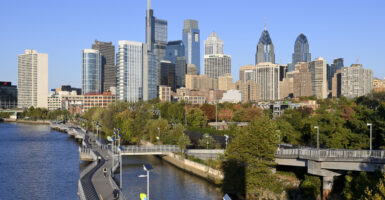 A probe of voter fraud begun by the Trump administration’s Justice Department that ensnared a former House Democrat and former Philadelphia election officials has resulted in additional charges under the Biden administration.

The latest indictment extends the time period specified in the original indictment of the alleged chief conspirator, former U.S. Rep. Michael “Ozzie” Myers, which said the election fraud occurred from 2014 to 2016.

The Oct. 12 indictment alleges that Beren, previously a judge of elections and a poll watcher, stuffed phony ballots into voting machines and encouraged legal voters to cast fraudulent votes for absent family members. According to the indictment, Beren worked for someone identified only as “Consultant #1.”

Judge of elections is the title that Philadelphia gives to someone in charge of a polling place during a primary and general election.

Although the indictment doesn’t name the consultant, the same U.S. attorney’s office secured an indictment on election fraud and bribery in July 2020 against Myers. That indictment said the former congressman worked as a consultant for numerous political candidates in Philadelphia.

The indictment of Beren reads:

As a political consultant, Consultant #1 held himself out as an effective and successful political operative capable of ensuring his clients’ electoral success. Consultant #1 exercised influence and control in Philadelphia’s 39th Ward by distributing cash payments and supporting family, friends, and allies for elective office in the 39th Ward, and installing Ward Leaders, Judges of Elections, and Democratic State Committee Persons.

Local media has reported that the unnamed “Consultant #1” almost certainly is Myers.

He served three years in federal prison after being convicted in the Abscam bribery scandal of the late 1970s, which led to the conviction of one U.S. senator, six U.S. House members, and three members of the Philadelphia City Council.

“This was a real example of election fraud for local judicial races that can be decided by a dozen votes,” Patrick Christmas, policy director for the Committee of Seventy, a group founded in 1904 to oppose corruption in Philadelphia, told The Daily Signal in a phone interview.

“They got caught by local election officials because the consultant is a relic thinking this is decades ago,” Christmas said, referring to Myers.

In the Oct. 12 indictment, federal prosecutors allege that Beren “cast fraudulent votes in support of Consultant #1’s preferred candidates on behalf of voters she knew would not physically appear at the polls.” It adds that Beren “would also permit and encourage individual voters from the 39th Ward, 2nd Division, to cast ballots on behalf of absent family members who had not appeared at the polling station in person.”

The indictment of Beren also says:

Beren, of course, is presumed innocent. The Daily Signal called two phone numbers listed on WhitePages.com for a Marie Beren in Philadelphia and left a voicemail message at one. No one picked up at the other number. Beren did not respond to the voicemail message.

Beren is still listed as a staff member on the website of the Philadelphia City Council, but a staffer who answered the phone for Squilla said Beren hasn’t worked for the council for about two years.

This was an operation that was small in scale and didn’t likely have a major impact in election outcomes, Christmas told The Daily Signal.

He noted that more modern voting machines can detect the time that elapses between votes cast, making it clear when an unusually large number of votes is cast in rapid succession.

Another dead giveaway was that more ballots were cast than the number of names in the polling book in the years that federal investigators found fraud.

“Law enforcement should follow the money of who hired the consultant,” Christmas said. “Any fraudulent vote cast is serious.”

It’s still not clear which candidates benefited from the election fraud, or whether the fraud was a determining factor in any of the election outcomes.

The indictment’s reference to “federal, state, and local elective offices” is enough to make it a federal case.

That indictment alleges that Myers bribed DeMuro and others to stuff ballot boxes to benefit specific candidates in Pennsylvania’s Democratic primary elections in 2014, 2015, and 2016. The new Beren indictment says the ballot stuffing occurred from 2015 through 2019.

“This case shows that election fraud does exist, and does happen in Philadelphia,” Nathan Benefield, vice president of the Commonwealth Foundation, a conservative think tank in Harrisburg, Pennsylvania, told The Daily Signal in an email.

This is a matter that the state Legislature should address, Benefield added.

“While it may be accurate that there was not ‘massive election fraud,’ enough to change the results of recent statewide elections, we should not tolerate any election fraud or sweep it under the rug,” Benefield said. “The good news: There is bipartisan legislation in the Pennsylvania Legislature that would help address that, and increase the security and integrity of our elections. All we need is Gov. [Tom] Wolf to come to the negotiating table.”

The investigation stemmed from a 2014 referral to the Justice Department by Philadelphia City Commissioner Al Schmidt, a Republican, who is one of three officials responsible for elections and voter registration.

The evidence-based charges against Myers and the two other election workers should not be conflated with unproven allegations of voter fraud, the Committee of Seventy’s Christmas said.

“The same Republican election official that brought this case to the attention of federal prosecutors received death threats after the 2020 election,” he said.

Schmidt testified to the U.S. Senate’s Rules and Administration Committee last Tuesday about threats against himself and his family in the aftermath of the 2020 election.

McSwain resigned from his post in January. President Joe Biden has not nominated a replacement as U.S. attorney for the Eastern District of Pennsylvania.

Williams, the acting U.S. attorney there and a career federal prosecutor, secured the grand jury indictment of Beren and the superseding indictment of Myers.

It’s not a certainty that the case will continue once a political appointee is in the U.S. attorney’s position, said Hans von Spakovsky, a senior legal fellow with The Heritage Foundation who is a former Justice Department lawyer.

For now, it appears that federal prosecutors are “slowly rolling up everyone involved” who worked with Myers in the alleged election fraud, von Spakovsky said.

The next question, he said, will involve not only Myers but the former congressman’s clients who were candidates for public office.

“Was he doing this on his own, or with the full knowledge of his clients?” von Spakovsky said.