Fighting Woke Agenda, Tampon-Maker Says ‘Only Women Can Have Periods’ 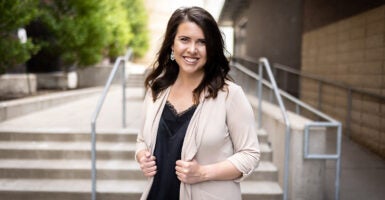 Macy Maxson promises her tampon company Garnuu will never refer to women as a “menstruator or bleeder, chest feeder ... [or] a pregnant person. … We're keeping women, and we're keeping periods to be a girls-only club,” she said. (Photo: James Sawatzky)

When Macy Maxson began using her tampon-subscription company Garnuu as a platform to say that “only women can have periods,” some called her a liar.

“A lot of people were saying that I was spreading lies to people,” Maxson told The Daily Signal on the “Problematic Women” podcast.

Maxson said she received emails from individuals who were concerned that her rhetoric would lead children to think that only women can have periods. The comments she received surprised her because the reality that only women menstruate is “the truth, and so we’re just in a world that doesn’t know truth anymore.”

Maxson founded Garnuu in 2020, and uses the organization’s Instagram account to proclaim that only women “menstruate and create life.”

At around the time of Garnuu’s founding, several prominent feminine hygiene brands voiced support for the transgender movement.

In 2019, Always, the period product brand, announced it was taking the Venus symbol off its packaging.

“We’re also committed to diversity and inclusion, and are on a continual journey to understand the needs of all of our consumers,” Procter and Gamble, Always’ parent company, said in a statement explaining why the classic female symbol was being removed from the period products.

In 2020, the tampon company Tampax tweeted, “Fact: Not all women have periods. Also a fact: Not all people with periods are women. Let’s celebrate the diversity of all people who bleed!”

The period products brand Callaly launched a campaign in 2020 to acknowledge “that not only cisgender women have periods,” Kate Huang, the company’s chief marketing officer, told Forbes.

Instead of joining the pro-transgender narrative being furthered by brands such as Tampax and Always, Maxson is telling anyone who will listen that “periods are for women only.”

Maxson promises her company will never refer to women as a “menstruator or bleeder, chest feeder … [or] a pregnant person. … We’re keeping women, and we’re keeping periods to be a girls-only club,” she said.

Garnuu’s mission is also philanthropic, with a portion of the money from subscription sales going to support Nepali girls and women with period products and entrepreneurship opportunities.

“I wanted a chance for women to make a real difference with their periods,” Maxson said, adding each purchase provides an opportunity to “support women all over the world who are vulnerable to sex trafficking.”

Garnuu’s name is inspired by its mission to save women and girls from human trafficking and comes from the Nepali word for “rescue.”

Garnuu is currently offering listeners of the “Problematic Women” podcast 10% off their purchase with the code “ProblematicWomen” at checkout.

Listen to Maxson’s full interview on “Problematic Women” below: