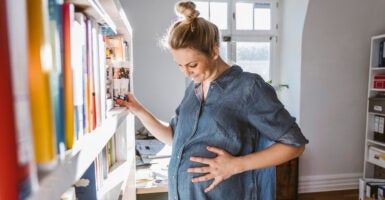 In a tweet Wednesday, the Centers for Disease Control and Prevention shared a graphic about the COVID-19 vaccine and “pregnant people.” (Photo: Getty Images)

Once again, the federal government is caving to political correctness.

In a tweet Wednesday, the Centers for Disease Control and Prevention shared a graphic about the COVID-19 vaccine and “pregnant people.”

Pregnancy isn’t hair color or skin color or height or a thousand other attributes that could happen to people of either sex. If you’re pregnant, it’s because you’re a woman—because you have a vagina, a uterus, and everything else necessary for a baby to be conceived and grow.

If someone doesn’t “identify” as a woman and is pregnant, it’s still because that person is biologically female. Our scientists—who seem to have little humility or wisdom about the dangers of manipulation and control of life—are recklessly working on uterus transplants and other technology that could allow a man to be pregnant, but we’re not there yet.

Yet the CDC’s gross tweet comes amid a bigger attempt to divorce women from their bodies. The Lancet, a British medical journal, recently referred to “bodies with vaginas” on its cover. (No doubt the suffragettes would be thrilled with the progress we’ve made.)

The ACLU altered a quote about pregnancy from the now-deceased Supreme Court Justice Ruth Bader Ginsburg, who apparently needs editing to meet the criteria of today’s woke climate, to remove references to women.

And make no mistake: The CDC graphic is not merely the action of some low-level woke bureaucrat. This is part of a larger push to say bodies are irrelevant to gender. The Biden administration’s proposed 2022 budget substituted “birthing people” for mothers. Rep. Cori Bush, D-Mo., who is a member of “the squad,” referred to “birthing people” when speaking at a congressional hearing in May.

In some ways, this is the logical conclusion of the transgender agenda. If everyone has to announce their pronouns—as college students are more and more forced to do—it bolsters the idea that physical characteristics are irrelevant to gender. (Because, of course, we don’t need to know 99.9% of people’s pronouns, because we can tell the difference between men and women on sight.)

If being pregnant isn’t a sign of being female, it’s another win for the camp seeking to divorce bodies from gender.

In other words, gender is all about what we think and feel, not what we physically are.

Think I’m being hyperbolic? Consider the case of Zoomer. Zoomer, who is now 5, was initially raised genderless. Or as his mom, Kyl Myers (preferred pronouns: they/she), put it: Zoomer was raised with “gender creative parenting.”

“For me, that meant not assigning a gender to Zoomer at birth, using they/them pronouns, not disclosing Z’s genitals to people who didn’t need to know and creating the most gender-expansive environment possible,” Myers, a sociologist, posted on Instagram.

At the old age of 4, Zoomer opted to go with he/his pronouns. Myers, author of “Raising Them: Our Adventure in Gender Creative Parenting,” recounts:

We had a pronoun check back in March 2020, around Z’s 4th birthday, that was quite special. I asked, ‘What pronouns are you into for yourself these days, Zoomer?’ And Zoomer responded, ‘I love he/him!’

I smiled. ‘That’s awesome, Zoomer. I am so happy you found pronouns you love.’ …

I want to remind folks that sharing Z’s pronouns doesn’t give any information about his reproductive anatomy.

Is Zoomer the future? Will gender reveal parties move from the pregnancy stage to the kindergarten era?

Will we keep trying to pretend our bodies are irrelevant?

And what’s up with this hyperfocus on ensuring everyone uses preferred pronouns and gender? I prefer to think of myself as intelligent, but Twitter isn’t banning people who call me stupid, even as it bans tweets that “misgender” someone.

Rachel Dolezal, a white woman who became notorious in 2015 for heading a chapter of NAACP and presenting as black, preferred to think of herself as black, but that didn’t stop the entire country from saying (rightly) she can’t just appropriate race. Why is gender the one arena where we think preferences must be honored, regardless of reality or free speech implications?

The federal government’s job is to serve the people, not promote radical agendas. But right now, the CDC is acting like an activist arm of the Democratic Party, not a neutral agency.