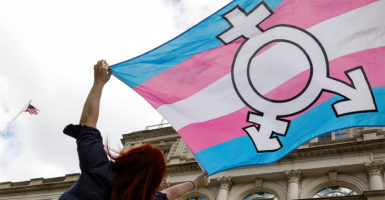 A person holds up a flag during a rally to protest the Trump administration's reported proposal to make the definition of gender to what a person was at birth, at City Hall in New York City on Oct. 24. (Photo: Brendan McDermid/Reuters/Newscom)

Twitter banned the use of biological pronouns to refer to transgender persons, adding a clause prohibiting the practice to its policy regarding hateful conduct.

The social media platform updated its policies on hateful conduct in October, but the move wasn’t largely noticed until Friday and Saturday when users began commenting on the change, Pink News reported.

“Targeted harassment or expressing hate towards a person, group, or protected category” is banned, according to Twitter’s Hateful Conduct Policy.

The media platform also writes it is “committed to combating abuse motivated by hatred, prejudice or intolerance.”

” … targeted misgendering or deadnaming of transgender individuals” is also banned, according to the updated policy rules.

So Twitter is now banning people for stating the basic scientific fact that men are men and women are women, and that men cannot become women simply by thinking themselves so. Twitter vs. reality. https://t.co/Ur6ap8zNUN

Twitter is now BANNING people for misgendering trans individuals on their platform.

They just updated their official policy to prohibit people from misgendering.

When did social media companies become censors of what people can think?https://t.co/0iFHGnTMnM

Twitter prohibits hateful imagery, references to mass murders or violent events, comments meant to incite fear in a certain group of people, calling for harm to a certain person or group of people, and violent threats made against an identifiable target.

Its tagline reads, “Hey daddy, what do you want me to do on cam for you? I’m all yours..hit that follow button to get to know me!”

Twitter does ban “the promotion of adult sexual content” for its paid advertising products, but the ban has failed to prevent large amounts of pornographic content from circulating on the social media platform.

Pornography has long been viewed as harmful by many notable scientists and doctors.

Dr. Patrick F. Fagan reported that habitual use of pornography fosters “a higher tolerance for abnormal sexual behaviors, sexual aggression, promiscuity, and even rape,” in a 2009 paper.

The American Bar Association maintains pornography is harmful to children and promotes aggression and negative behaviors toward women.

Twitter does have rules, however, against sharing “intimate media” without the subject’s consent.

Its policy also states, “Media containing adult content is not permitted within live video, profile or header images. All other instances of adult content should be marked as sensitive media.”