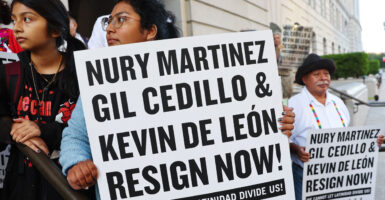 In a leaked tape, three members of the all-Democrat (plus one independent) Los Angeles City Council, along with a labor leader—all Latino—used racist, homophobic, anti-white, anti-Asian, and even anti-Mexican slurs as they plotted to redistrict the city council to increase “Latino power.”

LA is approximately 50% Latino, but Latinos control “just” 30% of the 15 council seats. For the party of diversity, inclusion, and equality, this is a problem. Worse, blacks, though less than 10% of the population, occupy 20% of the council seats. The three black council members preside over districts that are either majority Latino or where they make up the largest plurality. How dare Latino voters vote for black politicians!

Leading the parade of invectives was since-resigned City Council President Nury Martinez, herself a daughter of Mexican immigrants and whose rise in city politics was aided by a black mentor politician. Martinez—who has called former President Donald Trump “racist”—and the others directed much of their wrath against a fellow councilmember, Mike Bonin, a white man with an adopted black child.

They accused Bonin, whom Martinez said “thinks he’s f—ing black,” of using his black child as an “accessory.” Councilman Kevin de Leon said Bonin treated the child like a “Louis Vuitton bag” and Martinez described the boy as being “like a monkey.” As for Bonin, a gay man, Martinez called him “a little b—-.”

De Leon also took a swipe at both neighboring Orange County and the Los Angeles Times. He said Latinos need not fear “those crazies in Orange County who are pro-Trump. It’s the white liberals. It’s the L.A. Times.”

Another white man, the Los Angeles city controller, came under attack, as did the white colleagues on the council. Martinez said, “You need to go talk to that white guy [the city controller]. It’s not us. It’s the white members on this council that will motherf— you in a heartbeat.”

Martinez also attacked Los Angeles District Attorney George Gascon, but not for his soft-on-crime policies that many point to as a major cause of the rise in violent crime. About Gascon, Martinez said, “F— that guy … He’s with the blacks.” Apparently to Martinez, Gascon’s policies, which allow bad guys to remain on the streets where they disproportionately shoot and kill blacks, is being “with the blacks.”

In a discussion about whether immigrants from Oaxaca, Mexico, are part of Los Angeles’ Koreatown, Martinez said: “I see a lot of little short dark people. … I was like, I don’t know where these people are from, I don’t know what village they came [from], how they got here. They’re ugly.”

As for the Los Angeles County Federation of Labor’s President Ron Herrera, he publicly supports black candidates for council, but on the tape says, “My goal in life is to get the three of you elected. We’re like the little Latino caucus of our own.” If this means diminishing black political power to do so, well, so be it.

In the hourlong meeting, the four uttered not one word about the city’s record-setting crime and homelessness. They said nothing about the poor urban K-12 government schools or about the city’s declining population, caused in part by the lack of housing affordability for the working and middle classes.

Martinez and Herrera have resigned, while the two other council members, Gil Cedillo and de Leon, have been stripped of their committee assignments but have resisted calls for their resignation. Cedillo, however, lost his reelection bid, and his term ends in December. Tough to pin this on “white supremacy.” Was this the LA City Council or a KKK meeting?