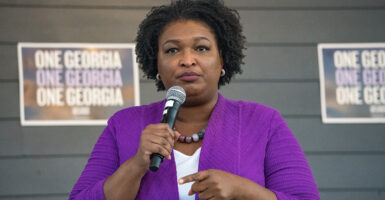 Abortion access could help to alleviate concerns over high inflation rates, according to Stacey Abrams, the Democrat nominee for governor in Georgia.

Abrams was asked what she would do as governor about “the cost of gas, food, bread, milk … to alleviate the concerns of Georgia voters about those livability, daily, hourly issues that they’re confronted with?”

“But let’s be clear,” Abrams responded, “having children is why you’re worried about your price for gas, it’s why you’re concerned about how much food costs. For women, this is not a reductive issue.”

“You can’t divorce being forced to carry an unwanted pregnancy from the economic realities of having a child,” Abrams said. “We don’t have the luxury of reducing it, or separating them out.”

The September consumer price index rose by more than 8% over the prior 12 months, according to the U.S. Labor Department. The cost of food rose by 11.2% and energy costs rose by 19.8% over the same period.

Abrams’ campaign office did not respond to The Daily Signal’s request for comment.