Fact Check: ‘There Is No Such Thing as a Heartbeat at 6 Weeks,’ Says Stacey Abrams 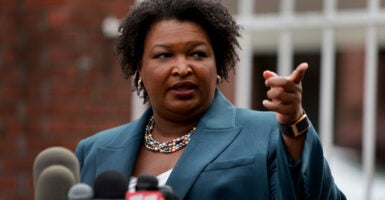 “There is no such thing as a heartbeat at six weeks. It is a manufactured sound designed to convince people that men have the right to take control of a woman’s body," said Stacey Abrams, pictured at the Israel Baptist Church in Atlanta on May 24. (Photo: Joe Raedle/Getty Images)

Stacey Abrams, the Democratic candidate for governor of Georgia, denied that unborn children have a heartbeat at six weeks and that the ultrasound is part of a grand conspiracy to give men control over women’s bodies—statements that run contrary to well-established facts and medical standards of fetal development.

Abrams hoped to establish that legislation protecting children from abortion after doctors can detect a fetal heartbeat is based on bad science. At a campaign event at Ray Charles Performing Arts Center in Atlanta on Wednesday, Abrams said, “There is no such thing as a heartbeat at six weeks. It is a manufactured sound designed to convince people that men have the right to take control of a woman’s body.”

Critics immediately mocked her assertion that an ultrasound is part of a vast patriarchal conspiracy to brainwash women, and some called Abrams a “circulation-denier.”

Marjorie Dannenfelser, president of SBA Pro-life America, said that Abrams “denies science” and “shows how far pro-abortion Democrats will go to strip the unborn of humanity and promote abortion on demand for any reason, at any point in pregnancy up until birth.”

Abrams, who is not a scientist, is virtually quoting an argument made by abortionists, and advanced by the abortion industry, that denies the science of embryological development.

Abortionist Nisha Verma told NPR that the fetal heartbeat is “actually electrical activity, and the sound that you ‘hear’ is actually manufactured by the ultrasound machine.” (It is unclear why “hear” is in scare quotes.)

Jennifer Kerns, who is also an abortionist, agreed that “the term ‘fetal heartbeat’ is pretty misleading,” because the heart’s motions really just amount to “some electrical activity,” and “[i]n no way is” the ultrasound “detecting a functional cardiovascular system or a functional heart.”

The Washington Post’s fact-checker, Glenn Kessler, tweeted the NPR article in Abrams’s defense, claiming: “FWIW, ‘fetal heartbeat’ is a misnomer. The ultrasound picks up electrical activity generated by an embryo. The so-called ‘heartbeat’ sound you hear is created by the ultrasound.”

In reality, even before it is fully formed, the fetal heart begins to contract and pump blood in a detectable way beginning at six weeks gestation. OB-GYNs rely on the sounds a Doppler ultrasound emits to properly convey the timing and extent of blood circulation in an unborn baby. Let’s look at each claim in a little more detail — and provide a lot more proof.

Does a Fetal Heartbeat Exist? If So, When Does a Baby’s Heart Begin to Beat?

If the definition of “heartbeat” is cardiac tissue contracting to pump blood through the circulatory system, then the answer is an emphatic “yes,” unborn babies have a heartbeat at six weeks.

The fetal heart begins as a tube, which contracts to pump blood as early as 22 days and begin circulating blood at week four, but it is not detectable by an ultrasound until six weeks. The heart’s four chambers develop at week seven.

The leading scientific and medical authorities have always referred to this activity as a fetal heartbeat. “At about six weeks, your baby’s heart beat [sic] can usually be detected,” according to the Cleveland Clinic, which is ranked the nation’s No. 1 hospital for cardiology and heart surgery. Until last year, the No. 2 cardiology hospital, the Mayo Clinic, stated, “The heart and other organs also are starting to form and the heart begins to beat” at six weeks.

But the Mayo Clinic altered its guide last September, shortly after Texas passed its heartbeat law, erasing mention of the fetal heartbeat even before Planned Parenthood got around to airbrushing away its admission that during weeks five-six “[a] very basic beating heart and circulatory system develop.” (The nation’s largest abortion provider now claims, “It sounds like a heartbeat on an ultrasound, but it’s not a fully-formed heart.”)

While abortionists may try to muddy the waters about whether the sound emitted by an ultrasound is a heartbeat, scientists have recorded video of an unborn child’s heart contracting to circulate blood at four weeks and four days.

What Do Authoritative Medical Textbooks and Scientific Studies Say About Whether a Baby Has a Heartbeat at 6 Weeks?

“In fact, at six weeks, when Stacey Abrams says a heartbeat doesn’t exist, that baby’s heart is actually beating at about 110 beats per minute (bpm),” said Dr. Tara Sander Lee, a Harvard Medical School graduate and currently the director of life sciences at the Charlotte Lozier Institute.

The legacy “media can perform Olympic-level semantics gymnastics all they want, but most Americans instinctively understand that a developing human organ which beats rhythmically and pumps blood throughout the body is, in fact, a heart.”

How Does Doppler Ultrasound Work? Is It Detecting a Fetal Heartbeat or Just ‘Electric Activity’?

Obstetricians measure a fetal heartbeat at six weeks by using a Doppler ultrasound. As a Canadian government website explains, the Doppler ultrasound works by emitting sound waves into the body to detect blood circulation inside a fetus. “The movement of blood cells causes a change in the pitch of the reflected sound waves. This is called the Doppler effect. If there is no blood flow, the pitch does not change,” it states.

In other words, the sounds produced by a Doppler ultrasound accurately reflect a person’s heartbeat.

Did a Scientist Invent This Sound as a Vast Conspiracy to Convince Women That Men Should Control Their Bodies?

There is no evidence that Edward H. Hon, who invented fetal heartrate monitoring in 1958 (15 years before Roe v. Wade), intended his device to convince anyone men should “take control of a woman’s body.” Nor did Abrams produce any evidence to that effect (much like her claims that Republican Brian Kemp stole the 2018 Georgia gubernatorial election).

Medical textbooks, authoritative studies, and the nation’s leading heart hospital agree that an unborn child’s “heart” begins developing at three weeks and that a “heartbeat” can be detected by six weeks. Abrams, NPR, and the abortion industry are wrong to assert otherwise. They should follow the science.

First published by The Washington Stand.