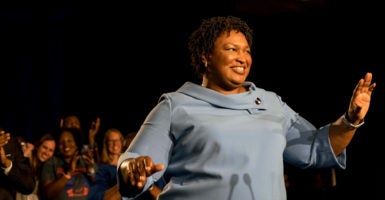 Stacey Abrams penned an essay in Foreign Affairs arguing for an embrace of politics based on identity. (Photo: The Washington Post/Getty Images)

Following the 2016 elections, liberal intellectuals like Mark Lilla and Francis Fukuyama counseled Democrats to stop embracing identity politics and instead appeal to Americans as Americans, not as divided groups.

The Democrats’ choice of Stacey Abrams to deliver the response to President Donald Trump’s State of the Union address may be a sign that’s not in the cards.

Abrams ran for governor of Georgia last year and lost by more than 50,000 votes, but has yet to be gracious about her defeat. She is now using the enthusiasm her campaign generated among her far-left base to argue against the universalist Enlightenment ideas upon which this nation was founded.

Abrams says those ideals are false, or at best “devoid of context.” What we need is “revolt.”

Her recent essay on identity politics, published last Friday by Foreign Affairs, is a forthright defense of dividing America into groups based on identities that can be as varied as race, ethnicity, sex, sexual orientation, gender identity, and even disability status. The only thing that matters is the ability to claim a trait that bestows victimhood status.

To people like Abrams who subscribe to this view, this status—and not intrinsic worth, hard work, or talent—is what entitles one to respect, government protection, and benefits.

This is a Marxist worldview that divides humanity into monolithic dominant or subjugated groups where any interaction between them is viewed only in terms of power relations.

Not everything that Abrams wrote in her essay is wrong. She is right to note that organized labor for a long time discriminated against African-Americans, and this “contributed to the rise of a segregated middle class and to persistent pay disparities.”

But much of the rest of her essay, written in a response to one by Fukuyama in the same publication, relies on selective or just plain wrong views of history.

She is wrong, for example, when she writes that “the marginalized did not create identity politics: their identities have been forced on them by dominant groups, and politics is the most effective method of revolt.”

Blacks in America have a long history of victimization and exclusion. But analogizing their unique experience to that of other people and creating a long list of different castes with grievances is a complete non-sequitur. Yet it is a project to which activists have devoted a lot of time and effort, as an examination of the record shows.

A 1970 study from UCLA, funded by the Ford Foundation, showed that even at the dawn of the ‘70s, rank-and-file Mexican-Americans neither saw themselves as a marginalized group nor even as a minority at all. “Indeed, merely calling Mexican-Americans a ‘minority’ and implying that the population is the victim of prejudice and discrimination has caused irritation among many who prefer to believe themselves indistinguishable white Americans,” the authors concluded.

The testimony of the time is riddled with evidence that identity politics was far from a grassroots movement, as Abrams and others always proclaim. As the historian David G. Gutierrez wrote, “Even if many Mexican-Americans refused to accept a Chicano self-identity, much less the ethnic separatism espoused by the militants, the actions of the Chicano activists undoubtedly convinced at least some government officials that the militants’ grievances warranted attention.”

Even earlier, the sociologist George I. Sanchez had written to Julian Samora (one of the activists who sought group making, and later went on to found La Raza), “For gosh sakes, don’t characterize the Spanish-American with what is obviously true of the human race, and then imply, by commission or omission, that his characteristics are peculiarly his and, OF COURSE, radically different from those of the ‘Anglos.’”

The poor, Sanchez wrote to Samora, all shared the same societal dysfunctions, no matter their race and ethnicity. “The characteristics that distinguish the Spanish-speaking group in any part of the United States are much less ethnic than they are socio-economic … . [T]here is no real ethnic sameness among the various subdivisions of the same Spanish-speaking group.” It takes “a veritable shotgun wedding to make Puerto Ricans, Spanish-Mexicans, and Filipinos appear to be culturally homogenous.”

But in her essay, Abrams rejects socio-economic arguments as a “class trap” and doubles down on what she thinks is the real narrative: identity politics.

And of course, there’s the part about politics being a means to revolt. The Declaration of Independence takes an entirely different view when it states that “governments are instituted among men” to secure the rights to “Life, Liberty and the pursuit of Happiness.”

But of course, these are natural rights that are part of the inheritance of the Enlightenment, and Abrams makes very clear that she thinks its universalist claims are a bunch of hooey.

She attributes the success of her coalition (again, she lost, despite the support of the entire cultural establishment; even Oprah Winfrey campaigned for her) to “articulating an understanding of each group’s unique concerns instead of trying to create a false image of universality.”

She returns to this theme when she warns against “a retrenchment to amorphous, universal descriptors devoid of context or nuance.”

It is here that Abrams demonstrates the danger of identity politics. She is rejecting the ideals of the Enlightenment and even the Renaissance, and returning us back to the estates and classes of the Middle Ages. This threatens fundamental concepts such as the right to conscience, property, speech, and due process, never mind the bedrock ideal that “all men are created equal.”

It simply isn’t true, as Abrams writes, that identity-politics activism “will strengthen democratic rule, not threaten it.” It is equally contradictory that embracing “the identities of groups in a democracy enhances the complexity and capacity of the whole.”

Thinking of individuals as members of sub-collectives can never strengthen democracy, at least not democracy as we understand it, just as minimizing or even erasing commonalities is destructive of common purpose.

Abrams has a momentary lapse into lucidity when she points out that “the current demographic and social evolution toward diversity in the United States has played out alongside a trend toward greater economic and social inequality.”

Right. That’s why identity politics isn’t working. It is predicated on inequalities, so it has to perpetuate them.

But, alas, that’s not her takeaway. Instead, she says the entry of marginalized groups into public life has “spawned reactionary limits on their legal standing.”

Pray tell, what are those limits? Is this philosophy what one of our two major parties is going to be pushing going forward?