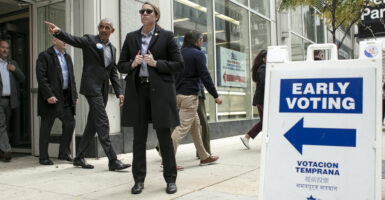 Chicago is requiring proof of a COVID-19 vaccination for election workers at early voting sites, but the move won’t affect poll watchers on Election Day, the city’s election board says.

Davis noted that rumors are flying and she doesn’t want poll watchers or election judges to think mistakenly that they have to show proof of vaccination to work Election Day.

“For the first time in decades, we have a real, concerted effort to have balance [at] our polls and we don’t want to see that disrupted,” Davis told The Daily Signal. “We have built countywide task forces, which are critical, because if there is an election incident, it’s often at the county level.”

But Chicago allows 40 days of early voting before Nov. 8, which is Election Day, a sizable amount of voting that isn’t subject to independent monitors at 52 locations.

In Illinois, election judges are paid to manage precinct polling places and assist voters, open and close the polling places, and complete reports when the polls close. A poll watcher represents a candidate, political party, or community organization and is legally credentialed to monitor voting to ensure election law and procedures are followed properly.

Chicago and Cook County are legendary for voting and corruption scandals, and the jurisdictions were considered determinative when Democrat John F. Kennedy won the 1960 presidential election.

“This goes back to the Chicago machine, as far as I’m concerned,” said Davis, who also is the state director of the Election Protection Initiative at FreedomWorks, a conservative advocacy group. “It is built into the law to give the Left an advantage.”

A study released last month by the National Bureau of Economic Research seems to back up a long-held presumption that vaccine hesitancy is more widespread on the Right than the Left.

The study found that Republican-leaning counties had a higher “excess” death rate from COVID-19—meaning above the expected death toll relative to the pre-pandemic baseline—than Democrat-leaning counties after three approved vaccines were widely available. The disparity did not exist before that availability.

No vaccination or mask requirements exist in Chicago for poll watchers, election judges, or election coordinators on Election Day, said Max Bever, director of public information for the Chicago Board of Election Commissioners.

“Applicants for part-time work with the board, which includes working as an early voting official, are required to be fully vaccinated, a resident of the city of Chicago, and be able to pass a background check,” Bever told The Daily Signal in an email.

“Early voting officials assist voters at early voting sites in the city of Chicago by: checking voters into the e-pollbooks, issuing voter cards to use in voting touchscreens and the ballot printer, and [helping] voters with voter registration and other questions,” he wrote.

Bever said that early voting officials hired contractors through the elections board and applicants must comply with board policy, which includes being vaccinated for COVID-19. Early voting officials earn $17 an hour and are hired by contract for about two weeks at a time, he said.

The matter was first reported by the Illinois Review.

Last week, Janine Small, president of international development markets for Pfizer Inc., testified to the European Parliament that the pharmaceutical company didn’t know whether its COVID-19 vaccine would prevent viral transmission before bringing it to market. This development cast doubt on the need for “vaccine passports” and other mandates imposed in European countries.

“This is obviously a useless and unnecessary requirement,” said Hans von Spakovsky, manager of the Election Law Reform Initiative at The Heritage Foundation, the parent organization of The Daily Signal. “Whether the government has the legal authority to require it, I would think, is also a matter of dispute.”

Von Spakovsky added: “Given the fact that election officials all over the country are always having problems finding enough election workers, I think a requirement like that seems extremely foolish.”