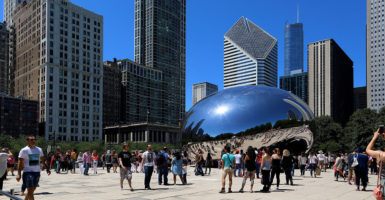 When people ask Jeremy Chong about his Friday night plans, they don’t get the typical college sophomore response. He and his friends usually head to downtown Chicago. But the point isn’t to party—it’s to evangelize. And thanks to a federal judge, the group of Wheaton students can finally resume that without harassment.

For months, students like Chong and Matthew Swart would pass out gospel tracts at Millennium Park. They were just simple threefold pamphlets telling people about faith in Jesus Christ.

“[We were] passing those out to anyone who would take [them] and having conversations when we were approached.”

Simple enough, right? Wrong. The park’s security team saw what was happening and stopped them—not once, but again and again. By the fifth time, the students had enough.

They connected with a religious freedom law firm called Mauck & Baker and started knocking on the doors of park management.

“We went back and forth with the city for a while, asking them to change their rules,” Swart explained.

Well, they changed their rules all right. They decided, in an absurd new policy, to divide the park into 11 imaginary rooms. And—give Chicago points for creativity—only one of those “rooms” allowed open conversations about faith.

After weeks of meetings and letters, they all agreed there was no resolving the matter amicably, as they hoped. So, they took the city to court.

Six months later, their persistence paid off. U.S. District Judge John Blakey—a Barack Obama appointee, no less—decided that while the park may want “protect [its] aesthetic integrity … the city’s restrictions prohibit reasonable forms of expression in large areas of the park.” The students, he agreed, had a First Amendment right to evangelize and hand out Christian material—and then ticked off several reasons why.

Blakey also took a shot at the city’s internal intolerance, pointing out that “[Scott] Stewart, [the executive director of the Millennium Park Foundation] conceded that ‘almost no one lodged complaints about their inability to enjoy the art’ in the Park, even before the current Park restrictions became effective.”

In the end, it was such a thorough judicial rebuke, Mauck said happily, that it would be difficult for the city to “circumvent the opinion with a quick rule change” as it had before. That’s good news for students like Chong, who feel the stakes could not be higher.

“[This is about] getting the gospel to people because we love them,” he insisted. And salvation, he argues, is a life or death matter. “If somebody believes that the Willis Tower is going to collapse in an hour, it doesn’t matter what they believe,” explaining that he feels it is a calling to “run into the building and warn people that it’s going to collapse.”

Congratulations to the courageous team at Wheaton, who God is using to do great things for his kingdom! Hear the passion behind this effort from last year’s Values Voter Summit, where Swart joined a special panel of college students called “No Fear: Real Stories from a Generation Standing for Truth.”