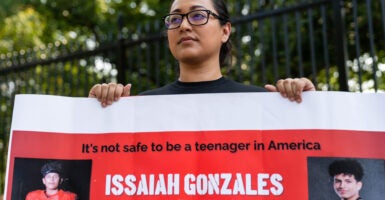 Meanwhile, also last week, a 13-year-old in Bakersfield, California, brought 150 fentanyl pills to his school. An adult who simply opened the bottle to inspect the pills was rushed to a hospital as a suspected overdose.

So, you need a U.S. government license to export it to the Russians, yet so much of it is coming across our southern border that a middle schooler can get ahold of enough of it to kill all his classmates. The eighth grader’s pills were disguised as Percocet, a milder though addictive painkiller, and inasmuch as the kid had $300 on him, he likely had sold some already.

These pills aren’t hard to find. On Aug. 24, two sisters were arrested in Arizona for carrying 850,000 fentanyl-laced counterfeit pills. The Border Patrol and customs officers have seized more than 12,900 pounds of the drug thus far in fiscal year 2022.

As The New York Times recently reported, teenagers can find stolen or fake Percocet and other prescription drugs online, and the pills are increasingly being laced with fentanyl. The Drug Enforcement Administration seized a shocking 20.4 million counterfeit pills last year and recently warned of a “dramatic rise” in fakes containing fentanyl. According to the agency, “4 out of every 10 pills laced with fentanyl contain a potentially lethal dose.”

Fentanyl gets bad press for good reason. It is a synthetic opioid manufactured in a laboratory. Made nowadays in Mexican labs and added to other powdered drugs, such as cocaine, or pressed into counterfeit pills, fentanyl is up to 100 times more potent than morphine, the baseline narcotic analgesic.

“Fentanyl is the single deadliest drug threat our nation has ever encountered,” according to DEA chief Anne Milgram.

On Sept. 17, families who had lost loved ones to fentanyl protested in Washington, D.C. They carried photos of some of the 107,375 Americans who died from drug overdoses in 2021, according to the Centers for Disease Control and Prevention, which reports that “synthetic opioids are the primary driver of the increases in overdose deaths.”

That’s more lives lost to drugs in one year than the nearly 60,000 American troops who died in our entire 10-year involvement in Vietnam.

The mothers’ group Lost Voices of Fentanyl asked the Biden administration to classify fentanyl as a weapon of mass destruction and to designate Mexican criminal organizations, such as the Jalisco New Generation Cartel, as foreign terrorist organizations.

Declaring the cartels terrorists could be a stretch, but fentanyl certainly has the capacity to be a weapon of mass destruction. In 2002, Russian special forces stormed a Moscow theater to rescue hostages. They first knocked out the terrorists and hostages alike with fentanyl gas, but it was so powerful, it killed 100 of the hostages through overdoses.

The Lost Voices mothers—and many other Americans—are desperate and angry, as they have a right to be. They want something done. One thing the White House could do is stop the flow over the border.

But what is it doing? The Biden administration’s usual response to a crisis is to throw a lot of money and words at it and hope for the best.

Consider, for instance, the Aug. 31 press statement “Actions Taken by the Biden-Harris Administration to Address Addiction and the Overdose Epidemic.” The director of the White House Office of National Drug Control Policy, Rahul Gupta, said that the overdose epidemic is “a top priority” for the administration and that it is “laser-focused on immediate actions.”

Although President Joe Biden’s National Drug Control Strategy promised $42.5 billion for drug control programs, the emphasis was on “critical public health interventions to expand research, prevention, treatment, harm reduction, and recovery support services.” Noteworthy is the fact that “significant investments in reducing the supply of illicit substances” was last on its list—down one from the Biden administration’s 2021 game plan.

The national strategy has money for users to buy test strips to see if their drugs have been cut with fentanyl. It provides more ways to get Naloxone, an emergency overdose treatment. It offers $30 million in grants for harm reduction, plus studies on harm reduction, and a “Recovery Summit” that centered on participants’ “lived experience.”

There’s treatment stressing special help for “underserved communities,” including “incarcerated individuals” (that’s “prisoners” to you and me), more executive orders, another “Framework” plan, and a U.N. vote for “international action.” And of course, the administration’s recommendations contained “guidance for health departments on addressing drug overdose through the use of a health equity lens.”

There are some worthy projects there, but it’s hard to see any of it helping a high schooler at a party being offered a single pill that turns out to be deadly. Just 2 milligrams of fentanyl—less salt than you’d sprinkle on a boiled egg—is considered a potentially lethal dose. Many parents have lost a child to a single pill. Their children were not hardened drug users, just teenagers experimenting—perhaps foolishly, but in ways that were rarely deadly until these synthetics came along.

Cutting the supply of drugs has to be the priority. There have been about 4 million apprehensions of illegal migrants at the border since Biden took office, while around 900,000 are estimated to have snuck in without encountering U.S. agents at all.

Applying the same 4-1 ratio to drugs is optimistic, as drug smugglers, unlike illegal migrants, have no incentive to surrender to border agents so they can be processed and welcomed into the country. So, the White House touting that it has seized an average of more than 800 pounds of fentanyl a month in fiscal year 2021, which was double the seizures of 2020 and quadruple those of 2019, is not the win it thinks it is.

Fentanyl is not home-grown. The precursor chemicals principally originate in China, and the Mexican cartels manufacture the final product before smuggling it over our border. Homeland Security Secretary Alejandro Mayorkas should put the Border Patrol back on that border instead of having it working in mass social-service processing centers for illegal migrants.

He should finish building a system of physical barriers to deter “got-aways.” He should use the “Remain in Mexico” policy to stop thousands of migrants rushing the border every day and giving cartels the cover to bring dangerous drugs into our country.

Fentanyl causes the most opioid drug deaths in America. Our leaders owe us more than ideological platitudes and programs.