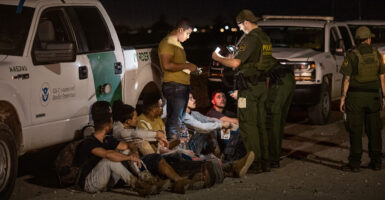 Immigrants are processed by U.S. Border Patrol after crossing the border from Mexico on Aug. 20, 2022, in Yuma, Arizona. (Photo: Qian Weizhong/VCG via Getty Images)

U.S. Border Patrol has seen a massive spike in southern border encounters with people on the U.S. terror watchlist between ports of entry, according to Customs and Border Protection statistics.

CBP personnel came across individuals on the watchlist 78 times in those areas between October and August, the data reveals. There have been more than 2 million migrant encounters on the southern border so far this fiscal year, a record-breaking surge.

There’s been dramatically less coverage of the 78 illegals on the terror watchlist than the 48 illegals who spent a night at Martha’s Vineyard https://t.co/FN531qGLjm

Harris insisted in a “Meet the Press” interview released Sept. 11 that the border was “secure,” admitting, “We also have a broken immigration system and particular[ly] over the last four years before we came in and it needs to be fixed.”

Border Patrol Chief Raul Ortiz conceded under oath in late July that the southern border was in crisis. Rep. Henry Cuellar, D-Texas, said Sept. 9 that the border was not closed, arguing the administration was “not on the same page” when it claimed otherwise.

The White House and CBP did not immediately respond to the Daily Caller News Foundation’s request for comment.