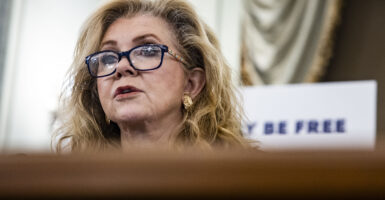 "My resolution calls out Democrats’ attacks on the Constitution and underscores the importance of preserving it,” says Sen. Marsha Blackburn, R-Tenn., pictured during a Senate hearing Oct. 26, 2021. (Photo: Samuel Corum/Getty Images)

Sen. Marsha Blackburn has introduced a resolution defending the Constitution from “leftist attacks” and affirming that “the Constitution of the United States is not a flexible document, but an enduring covenant.”

Blackburn, R-Tenn., is pushing back on ongoing attacks from leftists on the United States Supreme Court, particularly following the recent pro-life victory in Dobbs v. Jackson Women’s Health Organization, and calls to end the “archaic” Senate filibuster, should Democrats win seats in the upcoming midterm elections.

In recent days, liberal activists like Demand Justice board member Elie Mystal have gone so far as to call the Constitution “kind of trash” in advocating packing the Supreme Court.

Blackburn’s resolution, first obtained by The Daily Signal, comes ahead of Constitution Day commemorating the signing of the historic document by America’s Founding Fathers on Sept. 17, 1787, in Philadelphia.

The Tennessee Republican called for the Senate to celebrate the signing of the historic document by recognizing Constitution Day on Sept. 17 and affirming that the Constitution is “an enduring covenant.”

“The United States is the freest nation in the world, and it remains free because of the rights secured by the Constitution,” Blackburn told The Daily Signal. “This guiding document has faced relentless attacks from leftist radicals who are determined to destroy the balance of power laid out so carefully by the Founding Fathers and seize control over every aspect of American life.”

“My resolution calls out Democrats’ attacks on the Constitution and underscores the importance of preserving it,” she added.

The senator’s resolution emphasizes that the “Constitution establishes justice, ensures domestic tranquility, provides for the common defense, promotes the general welfare, and secures the blessings of liberty, now and for future generations.”

The resolution also notes that “the Constitution guarantees that no one can be deprived of life, liberty, or property without due process of law, including unborn children” and “protects the rights of conscience against the enterprises of the civil authority.”