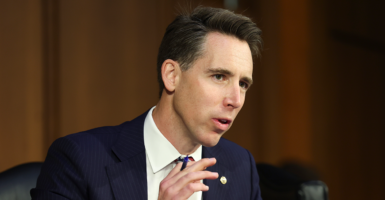 A Republican senator is calling on three major credit companies to reverse course after announcing new policies that would distinguish firearm-related purchases from other retail purchases, according to a letter sent Tuesday.

“I write to express serious concern with your decision to separately categorize gun-related purchases from other retail transactions made with your payment cards so that firearm purchases can be more easily tracked,” Sen. Josh Hawley, R-Mo., wrote in a letter to the chief executive officers for Visa, Mastercard, and American Express, noting that numerous media outlets labeled the move a “major win for gun control advocates.”

“This new system is ripe for abuse and brings to mind similar policies of Big Tech companies and payment processors that have targeted law-abiding Americans for engaging in constitutionally protected activities. I urge you to immediately reverse course,” Hawley wrote.

The Missouri senator, who called for the immediate end of the practice, added:

The Second Amendment is clear: The right of the people to keep and bear arms is guaranteed to law-abiding citizens and ‘shall not be infringed.’ Whether this infringement is by the federal government or powerful corporations seeking to ostracize citizens for exercising their rights, I will oppose all attempts to undermine the Second Amendment’s protections.

“Following ISO’s decision to establish a new merchant category code, Visa will proceed with next steps, while ensuring we protect all legal commerce on the Visa network in accordance with our long-standing rules,” the company told Bloomberg in a statement.

The National Rifle Association also sounded the alarm on the policy change adopted over the weekend.

“The ISO’s decision to create a firearm specific code is nothing more than a capitulation to anti-gun politicians and activists bent on eroding the rights of law-abiding Americans one transaction at a time,” Lars Dalseide, an NRA spokesman, told CBS MoneyWatch.

“This is not about tracking or prevention or any virtuous motivation — it’s about creating a national registry of gun owners,” Dalseide added.

“In a big victory today, these credit card companies are now required to categorize the sale of guns and ammunition,” James tweeted. “This decision will help us better address gun violence and avoid future tragedies.”

Many misunderstand what that means and are, in turn, advocating the use of MCCs to ‘track’ gun sales as a potential tool in combatting gun violence. That’s not what merchant codes are designed for, nor should they be.

“We do not believe private companies should serve as moral arbiters. Asking private companies to decide what legal products or services can or cannot be bought and from what store sets a dangerous precedent,” the blog added. “Further, it would be an invasion of consumers’ privacy for banks and payment networks to know each of our most personal purchasing habits. Visa is firmly against this.”

The Daily Signal sought comments from Mastercard and American Express but did not receive a response by press time. The International Organization for Standardization didn’t immediately respond to The Daily Signal’s comment request.

Have an opinion about this article? To sound off, please email?letters@DailySignal.com?and we’ll consider publishing your edited remarks in our regular “We Hear You” feature. Remember to include the url or headline of the article plus your name and town and/or state.