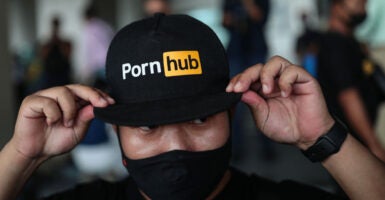 Mastercard also promised to take “immediate action” if Pulitzer Prize-winning opinion columnist Nicholas Kristof‘s allegations are true, telling The Associated Press: “We are investigating the allegations raised in The New York Times and are working with MindGeek’s bank to understand this situation.”

“Due to the nature of our industry, people’s preconceived notions of Pornhub’s values and processes often differ from reality—but it is counterproductive to ignore the facts regarding a subject as serious as CSAM [Child Sexual Abuse Material],” the pornography company said in a statement to The Daily Caller News Foundation.

The massively popular pornography website has been listed the 10th-most-visited website in the world, with 3.5 billion visits a month, and profits from almost 3 billion ad impressions every day, he wrote.

“The Department of Justice needs to open an investigation into the scumbags who run Mindgeek,” Sasse said. “Sexual exploitation and human trafficking are abhorrent, period. A decent society should be working to end this.”

The Department of Justice did not immediately respond to a request for comment from The Daily Caller News Foundation.