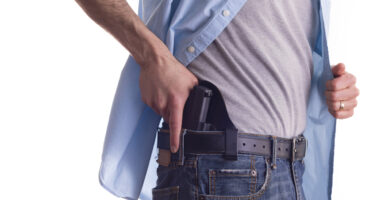 I testified before Congress’ Joint Economic Committee last month in a hearing focused on “the economic toll of gun violence.”

Of course, there’s no doubt that gun violence imposes a tremendous cost on society, both financially and in far less readily calculable ways. How does one measure, for example, the mental and emotional toll of being shot?

As I explained to the committee, however, lawful gun owners are not largely to blame for these costs, despite many insinuations to the contrary by gun control advocates. Most lawful gun owners never will harm themselves or others and never will add a single dollar to the overall bill for gun violence.

Meanwhile, lawful gun ownership provides significant but often underacknowledged protective benefits, enabling peaceable citizens to defend themselves and others far more effectively than if they were unarmed.

The examples below represent only a small portion of the news stories on defensive gun use that we found in July. You may explore more by using The Heritage Foundation’s interactive Defensive Gun Use Database. (The Daily Signal is Heritage’s multimedia news organization.)

As these examples underscore, lawful gun owners save lives and protect livelihoods. They routinely interrupt criminal activity and stop bad situations from becoming even worse. Significant evidence indicates that the threat of armed resistance deters many criminals from committing crimes in the first place.

And in this way, lawfully armed civilians help reduce the costs imposed on society by criminal actors.

Lawful gun owners are not a significant part of the problem of gun violence. The evidence shows, however, that they are part of the solution.