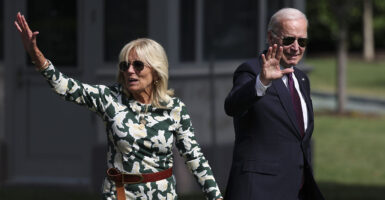 First lady Jill Biden said parents should not be able to exclude any books from school libraries in a Tuesday interview on the “Today” show. NBC News correspondent Sheinelle Jones had hinted at recent debates in asking her about school libraries.

“Parents and politicians are now weighing in on what books should be in our school libraries, and what their kids are being taught,” Jones began. “Where’s the line, in your opinion, with how much of a say parents have when it comes to what their kids are learning in school? Is there a balance between, you know, ‘This book should be in the library, this book is under review … ’”

Before Jones finished the question, Jill Biden jumped in: “All books should be in the library. All books. This is America. We don’t ban books.”

Biden’s comment dismisses the ongoing controversy over whether public school libraries should exclude books that parents consider pedophilic and obscene, to protect children from them.

>>>DeSantis: Purpose of Education Is to Educate, Not ‘Indoctrinate’ Kids

Public schools in Fairfax County, Virginia, faced backlash last year after parents learned that school libraries offered two books in particular: “Lawn Boy” by Jonathan Evison, which includes long sections of a boy reminiscing about explicit experiences he had at age 10, and “Gender Queer: A Memoir” by Maia Kobabe, which features images of sexual acts between a boy and a man.

Loudoun County Public Schools in Virginia also came under fire in 2021 after parents learned that each elementary school in the county kept four copies of a book on gender ideology titled “It Feels So Good to Be Yourself.” The book, in the author’s own words, was marketed to children ages 4-8 and “for trans kids, cis kids, non-binary kids, gender-fluid kids, gender-expansive kids, questioning kids, and all kids, everywhere.”

According to Jill Biden’s logic, the parents who protested Loudoun and Fairfax County public schools were out of line—and un-American—for wanting to remove pornographic and ideological material out of their kid’s libraries.