Smearing Your Opponents Is No Way to Run a Republic 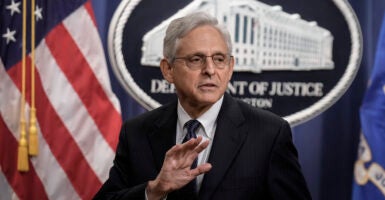 Name-calling on the internet is nothing new. Enduring attacks based on biased or discredited sources is so common online it’s practically the price of admission for anyone seeking to contribute to the free market of ideas.

So trolls and hecklers are hard to avoid. But when reputable sources and institutions mimic their tactics, we have a problem.

That’s why, when a senior official in the Justice Department tosses about a smearing “hate group” label, all Americans should take notice—no matter their political leanings.

A Florida health official, Jason Weida, posted to LinkedIn: “Honored to speak with Matt Sharp at Alliance Defending Freedom about the work we’re doing in Florida to protect kids from experimental medical interventions and to defend parental rights, all thanks to the leadership of Governor [Ron] DeSantis.”

Citing no evidence, Eric P. Bruskin, assistant director of the commercial litigation branch of the Justice Department’s Civil Division, dramatically replied referring to Alliance Defending Freedom: “Jason, this is a hate group. You’re speaking at a conference for a hate group. Are these the beliefs you hold? If so, then it’s time we end our professional association.”

ADF has successfully defended these fundamental rights for decades, racking up 14 wins at the U.S. Supreme Court and winning nearly 80% of its cases nationwide.

This apparently is what constitutes a “hate group” in today’s Justice Department.

Although Bruskin didn’t cite the Southern Poverty Law Center by name, there is little doubt about where his gross mischaracterization of ADF came from. No other group in America rivals the SPLC for publicly and recklessly slurring anyone or any organization that disagrees with its political views.

The Southern Poverty Law Center has been thoroughly discredited repeatedly, most notably by its own admitted institutional racism, sexual harassment, and discrimination. But officials at the Justice Department and other federal agencies appear to have bought SPLC’s lies and are using their power to advance a radical agenda that relies on those distortions.

In the past two years, U.S. Attorney General Merrick Garland has supported investigations of parents who oppose radical gender and race theories in the classroom. And the Department of Agriculture has threatened to shut down a school lunch program for schools that did not fall in line with the Biden administration’s views on sexual orientation and gender identity.

President Joe Biden has tried to rewrite Title IX, defying the separation of powers, and called nearly half the nation a “threat to democracy”—just for holding different political views than his.

This looks like a government our Founders warned us about. Alliance Defending Freedom stands ready to protect the God-given rights of all Americans from the very government whose original purpose was to protect those rights. No amount of name-calling, deplatforming, or attempted canceling will dissuade those who cherish liberty from rising to its defense.

The smearing of opponents to silence dissent threatens to ruin our republican form of government. Americans must resist and expel this cancer if free thought, free speech, and a free society are to survive. What better place to start than the Department of Justice?