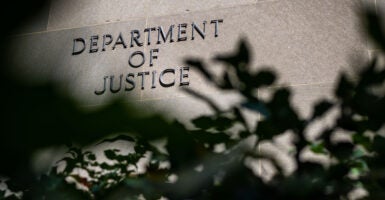 A senior Justice Department official referred to a highly regarded religious liberty organization as a “hate group” in a recent LinkedIn post.

The Justice Department’s social media policy discourages employee comments that could be “perceived as showing prejudice” toward characteristics such as religion.

Bruskin, previously a lawyer with the ACLU of Massachusetts appeared to follow the lead of the Southern Poverty Law Center, a left-wing group that regularly calls Alliance Defending Freedom and other conservative organizations “hate groups.”

Bruskin used the term “hate group” in responding to a LinkedIn post by Jason Weida, a former assistant U.S. attorney in Massachusetts who now is a state health official in Florida. Weida’s message also praised Florida Gov. Ron DeSantis, a Republican who routinely is attacked by Democrats.

In his post, Weida wrote: “Honored to speak with [senior counsel] Matt Sharp at Alliance Defending Freedom about the work we’re doing in Florida to protect kids from experimental medical interventions and to defend parental rights, all thanks to the leadership of Governor DeSantis.”

Bruskin referred to Alliance Defending Freedom in his reply to Weida, writing: “Jason, this is a hate group. You’re speaking at a conference for a hate group. Are these the beliefs you hold? If so, then it’s time we end our professional association.”

Bruskin’s title, workplace, and the preferred personal pronouns “He/Him” appear next to his name.

Bruskin left the American Civil Liberties Union of Massachusetts to work for the Justice Department in 2009, Barack Obama’s first year as president. In July 2020, he moved into his current career position as assistant director of commercial litigation.

The Justice Department includes a standard of conduct regarding personal use of social media as part of an employee manual.

This employee policy states that department employees are required at all times to adhere to certain government-wide standards of conduct that apply to online communications, regardless of whether at work, off duty, or using government equipment. The policy says:

All department employees should be aware of the following requirements governing the use of social media, and department attorneys should consider obligations imposed by applicable rules of professional conduct:

… Department employees should not make comments that can be perceived as showing prejudice based on race, gender, sexual orientation, or any other protected basis. To figure out what other protected classes means, the DOJ Civil Rights and Civil Liberties website states [that] federal law prohibits discrimination based on a person’s national origin, race, color, religion, disability, sex, and familial status.

“As department employees, we have been entrusted with the authority and responsibility to enforce the laws of the United States in a neutral and impartial manner,” Attorney General Merrick Garland said in a memo to Justice Department employees about the new policy. “In fulfilling this responsibility, we must do all we can to maintain public trust and ensure that politics—both in fact and appearance—does not compromise or affect the integrity of our work.”

On its website, Alliance Defending Freedom describes itself this way: “ADF is the world’s largest legal organization committed to protecting religious freedom, free speech, the sanctity of life, parental rights, and God’s design for marriage and family.”

“Alliance Defending Freedom is recognized as among the most effective legal advocacy organizations dedicated to protecting the religious freedom and free speech rights of all Americans,” Greg Scott, the group’s senior vice president for communications, told The Daily Signal in an email.

“[Alliance Defending Freedom] will continue to do the hard work of preserving liberty and leave the name-calling to others,” he added.

Bruskin did not specify in the short post on LinkedIn where he came up with the “hate group” characterization.

However, the Southern Poverty Law Center has designated Alliance Defending Freedom as a hate group. The left-wing group routinely lumps in conventional religious organizations and mainstream right-of-center groups with extremist organizations such as the Ku Klux Klan and neo-Nazis on a list of hate groups.

The Southern Poverty Law Center has been viewed as largely discredited since a discrimination and sexual harassment scandal rocked the outfit.

The organization was forced to apologize to British activist Maajid Nawaz and the Quilliam Foundation in 2018 after listing them in its “Field Guide to Anti-Muslim Extremists.” After Nawaz threatened to sue for defamation, SPLC settled the claim and agreed to pay $3.3 million in damages and post an apology video.

In 2015, the Southern Poverty Law Center placed Dr. Ben Carson, a renowned neurosurgeon then running for the Republican presidential nomination, on its “extremist list.”

Carson went on to become secretary of the Department of Housing and Urban Development during the Trump administration.

Weida declined to comment. The Florida Agency for Healthcare Administration, where Weida is an assistant secretary, did not immediately reply to inquires for this story.