California Dream Could Become a Nightmare 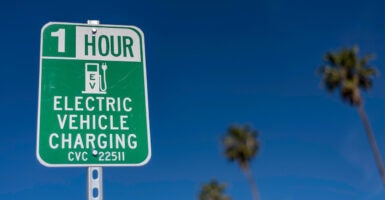 California lawmakers have voted to ban the sale of gas-powered cars by 2035. Journalist Dan Walters asks: “Is California willing to build the hundreds of thousands of recharging stations a complete conversion to battery-powered cars would require?” (Photo: GDMatt66/Getty Images)

“Well, they’re out there a-having fun In that warm California sun.”

California has become an example of what a state looks like when it is controlled by a single party—in this case Democrats—who are trying to impose a green energy secular religion on their people.

State officials have banned the sale of gas-powered cars by 2035, but a preview of the nightmare that could occur in the near future is happening now.

There are approximately 29 million cars, light trucks and motorcycles in the state. By some estimates it will take fifteen years to fully transition to all electric vehicles. Currently, reports the Associated Press, California has about 80,000 re-charging stations in public places, “far short of the 250,000 it wants by 2025.”

CalMatters columnist Dan Walters gets to the heart of the problem for electric car enthusiasts:

Let’s say someone living in San Francisco wanted to drive to Lake Tahoe for skiing? A 150-mile range would not even cover a one-way trip. The solution might be lots of recharging stations along interregional highways, but whereas a fill-up of gasoline might take 10 minutes, recharging electric cars now takes much longer.

Is California willing to build the hundreds of thousands of recharging stations a complete conversion to battery-powered cars would require? Could Californians drive their mandated ZEVs into other states without running out of juice?

There are other concerns, such as the cost of EVs, the life of batteries and the high cost of replacing them, the source of lithium from countries that are poor practitioners of human rights, as well as where all the required new electricity will come from (mainly fossil fuels now, though greenies think costly and ugly windmills, wind and solar sources can produce sufficient power, which is unlikely).

There is little consideration for increasing the availability of nuclear power, again because of the left’s antipathy toward that clean energy source.

Then there is the premise on which “climate change” is based. It is more theoretical than scientific (remember “global cooling”?); more political than logical.

With China and India still producing the most CO2, will electric cars in America address the perceived problem? Not according to David Kelly, academic director of the Master of Science in Sustainable Business Program at the University of Miami: “You have to think about what is the lowest cost way to get where we want to go. So, if the goal is to reduce carbon emissions or other pollutants, then electric vehicles are unlikely to be that.” Kelly drives a Tesla.

California is ordering its people to abandon choice when it comes to transportation in favor of expensive electric vehicles that are unlikely to provide the freedom they now enjoy with their gasoline-powered cars, all because of a secular faith that claims to know best what is good for us.