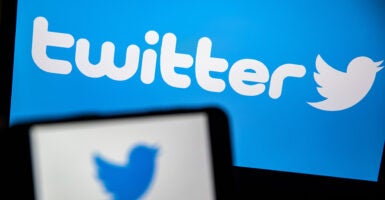 Twitter has suspended the Libs of TikTok account, and Sen. Marsha Blackburn says that only further highlights the social media platform’s double standard.

“Time and again, we’ve witnessed Big Tech’s double standard against conservatives,” Blackburn, R-Tenn., told The Daily Signal in an email Tuesday. “The Ayatollah is allowed on Twitter without question, but conservatives who hold up a mirror to the left’s agenda get suspended for ‘misinformation.’”

Libs of TikTok has gained international attention for sharing the radical left’s videos posted on the social media platform TikTok. The posts often highlight the radical nature of the left’s view on issues such as the transgender movement.

Libs of TikTok, which is run by Chaya Raichik of Brooklyn, New York, has 1.3 million followers on Twitter.

On Saturday night, Seth Dillon, the CEO of the satirical news website The Babylon Bee, tweeted that “Libs of TikTok has been locked out for ‘hateful conduct.’”

Libs of TikTok won’t be allowed to post or share content for seven days. It’s not clear which post Twitter found to be “hateful conduct,” but the suspension follows a post containing an audio recording of a telephone conversation that indicates Children’s National Hospital in Washington, D.C., performs “‘gender-affirming’ hysterectomies on minors, including 16-year-olds and ‘younger kids.’”

As heard in the audio, someone representing Libs of TikTok calls Children’s National Hospital and says her 16-year-old child is interested in a “gender-affirming hysterectomy.” She’s told by a hospital employee that “all different type of age groups … come in for [hysterectomies].”

A Children’s National Hospital spokesperson previously told The Daily Signal the hospital does not perform “gender-affirming surgeries” on minors.

“In the case of Libs of TikTok, the only investigation that should occur is an investigation into the hospital that admitted they are performing ‘gender-affirming’ hysterectomies on minors,” Blackburn said.

The following day, Aug. 18, Libs of TikTok Tweeted that “Facebook is telling us that they did not suspend our account. We have no access though and are locked out. Looks like it might be an ‘error.’ We should be back up and running soon.”

Libs of TikTok says bluntly: “Twitter suspended me for telling the truth.”