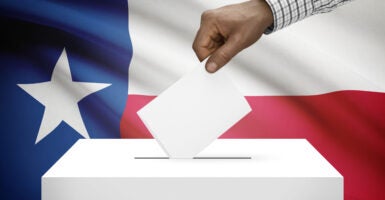 A Hidalgo County jury finds the former mayor of Edinburg, Texas, not guilty of voter fraud in a 2017 election. Two related trials are still to come. (Photo: Serhej Calka/Getty Images)

A Texas jury acquitted a former mayor on 12 counts of election fraud in connection with what prosecutors said was a ballot harvesting ring.

Molina was found not guilty of one count of organized fraud as well as 11 counts of illegal voting, all stemming from his 2017 election victory.

The verdict came three years after Texas Rangers arrested Molina in April 2019, along with 18 others, on charges of being part of a voter fraud conspiracy.

State prosecutors had alleged that Molina and his inner circle tried to convince voters—some outside Edinburg’s jurisdiction—to change their addresses to places where they didn’t live, including an apartment complex owned by Molina.

Molina testified in his own defense.

His lawyers argued that the former mayor didn’t intend to violate election laws. They provided a “mistake of law defense,” contending that Molina relied on “reasonable authorities” in telling voters they could change their address to participate in Edinburg elections, The Monitor newspaper, based in neighboring McAllen, Texas, reported.

Edinburg, located in the Rio Grande Valley, has a population of about 90,000. Of about 8,000 votes cast in the mayoral election in 2017, Molina, then a City Council member, defeated 14-year incumbent Mayor Richard Garcia with a margin of 1,240 votes.

Molina’s victory margin was larger than the known amount of fraudulent votes, so it’s highly unlikely that ineligible voters altered the result of the election.

But Molina’s defense lawyer argued, “If you review and rely on government sources, and you come to the wrong conclusion … then ultimately the jury must find not guilty.”

Texas has had numerous cases of voter fraud in the past. In 2017, the state enacted a ban on ballot harvesting, the controversial practice in which political operatives collect absentee ballots from voters. In 2021, Texas further fortified laws to restrict voter fraud.