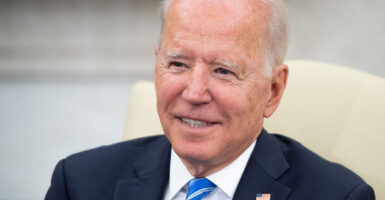 President Joe Biden claimed in a recent speech that state election reform efforts are “the 21st-century Jim Crow assault” and “the most dangerous threat to voting and integrity of free and fair elections in our history.”

This has to one of the most foolish things he has ever said. It also displays a fundamental ignorance of the real history of Jim Crow. Contrary to his outrageous charges, the states are acting to protect all of their voters and guarantee safe and secure elections. That is not Jim Crow.

Biden’s propaganda—there is no other word for his false claims—on July 13 in Philadelphia was timed to coincide with Democratic state legislators in Texas leaving the state to avoid a special session called by Gov. Greg Abbott to vote on election reforms.

Before discussing the untrue claims they also are making, we should note that by leaving the state, they are, in fact, demonstrating their contempt for the democratic process and evading their responsibility as legislators.

As Fox News contributor Byron York of the Washington Examiner accurately calls it, “Republicans won control of the Texas House by an 83 to 67 margin. … [Democrats] are frustrating the will of the majority, and the rights of Texans whose votes made Republicans the majority—in the name of voting rights!”

And what are they opposing? Keep in mind that Texas has a long history of election fraud, including in recent years. There are many proven cases demonstrating that in the Election Fraud Database maintained by The Heritage Foundation. (The Daily Signal is the news and commentary platform of The Heritage Foundation).

And that is without mentioning the infamous Ballot Box 13, which Lyndon Johnson used to steal his election for U.S. Senate in 1948. Texas has had a particular problem with vote traffickers, political operatives paid by campaigns to coerce and intimidate voters who are using absentee ballots. There is even a special name for them in Texas: “politiqueras.”

Texas has had a voter ID law in place for several years for in-person voting. Texas provides a free ID to anyone who doesn’t already have one, and Texans—including minority voters—have had no problems voting. With the significant expansion of absentee balloting, Texas wants to increase the security of the absentee balloting process by extending the ID requirement to absentee ballots.

Yet this is apparently so onerous and discriminatory toward black voters that it amounts to “voter suppression,” according to the Democrats who fled Texas, including state Rep. Michelle Beckley who claimed this makes “it harder to vote by mail.”

It is hard not to laugh at such an absurd claim when you look at this simple and easily met requirement, particularly when the latest poll shows that 84% of minority voters support voter ID.

Texas even wants to provide an opportunity for voters using absentee ballots to correct a defect in their ballot, such as forgetting to sign it before they mail it to election officials. You probably have not heard a word about that in all of the biased coverage.

The Texas Democrats are also complaining about a provision that requires anyone (other than an election official) “assisting” a voter to fill out a form providing the assister’s name, address, and other information, such as whether he is a relative or a paid political operative. This would give election officials the ability to identify someone who illegally intimidated or pressured the voter.

No one who is following the law would object to such a requirement. But Beckley does, saying this provision will make it “easier to prosecute people who assist mail and in-person voters.” She is certainly correct about that, but it seems she doesn’t want the politiqueras who illegally coerce voters to be prosecuted.

Democrats apparently also don’t want to guarantee the transparency of the election process. Election observers are a fundamental key to fair elections. That is why our own U.S. State Department sends observers to fledgling democracies all over the world and why the Voting Rights Act of 1965 had an entire section authorizing federal observers.

Yet in the last election, we saw instances of credentialed observers being ejected from polling and ballot counting locations or placed so far away from election activity as to make effective observation impossible.

So the Texas bill makes it clear that except for watching a voter cast his or her ballot, observers “may not be denied free movement where election activity is occurring” and are “entitled to sit or stand near enough to see and hear the activity.”

Mind you, the observers can’t interfere in the election process and can be ejected if they “commit a breach of the peace or a violation of law.” But election officials can’t refuse to give observers the access to which they are entitled under the law. This not discriminatory and not Jim Crow; it is good government.

Biden says what the states are doing is “pernicious.” No, what is pernicious are the outrageous lies that he and other liberals are spreading about commonsense election reforms sponsored by state legislators who are trying their best to protect the integrity of the franchise for all Americans.