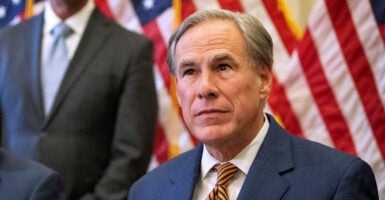 Texas Gov. Greg Abbott has signed a bill into law that repeals many of the voting measures that large cities in the state implemented amid the pandemic and overhauls the state’s mail-in voting and polling-place systems. Pictured: Abbott speaks at a press conference at the Texas Capitol in Austin on June 8, 2021. (Photo: Montinique Monroe/ Stringer/Getty Images)

Abbott, a Republican, traveled to Tyler, Texas, to sign SB 1, which repeals many of the voting measures that large cities in the state implemented amid the pandemic and overhauls the state’s mail-in voting and polling-place systems.

SB 1 also bars election officials from sending unsolicited mail-in ballot applications to voters, threatening jail time if they do so.

The bill cleared the state Legislature last week in its second special session. Democrats originally let the regular session expire in May, temporarily killing the bill, when they quietly left the capital in Austin and fled the state to Washington, D.C., after Abbott called the first special session days later.

“One thing that all Texans can agree on is that we must have trust and confidence in our elections,” Abbott said during the bill-signing ceremony. “The bill that I’m about to sign helps to achieve that goal.”

Supporters argue that the necessary restrictions within the bill will prevent voter fraud in future elections.

Critics, however, argue that the bill will place harmful restrictions on voters of color and voters in urban areas, two demographics that tend to vote Democratic. Voting rights advocates have already sued to have the bill thrown out, alleging that it will make it disproportionately harder for people of color to vote.