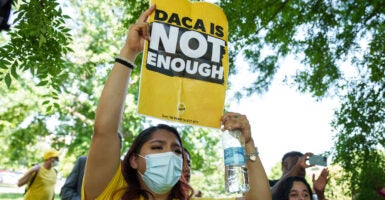 On Capitol Hill on June 15, open-borders activists press Congress to pass permanent protections for DACA recipients and create a pathway to citizenship. Congress has not done so, so the Biden administration is acting unilaterally to achieve a backdoor quasi-amnesty for them. (Photo: Drew Angerer/ Getty Images)

As if the American people needed further evidence of the misplaced priorities of the Biden administration, there’s more.

While the economy continues to tank, inflation continues to rise, and national security and public safety are threatened by intentional erosion of any semblance of border security or rational immigration policy, the administration has taken yet another indefensible action.

In keeping with President Joe Biden’s previous order protecting the Deferred Action for Childhood Arrivals program, the Department of Homeland Security published its final rule aimed at preserving and fortifying an unlawful immigration program creating a quasi-amnesty by executive fiat with no basis in statutory immigration law.

As expected, it includes an unrelated provision extending eligibility to apply for work authorization for any illegal alien who is placed in any “deferred action” posture, which basically means that the administration refuses to enforce immigration law and remove the illegal alien from the country.

That represents administrative overreach at its worst as the executive branch continually finds new ways to give aliens who are in this country illegally work permits to compete for jobs with American workers in the midst of a recession.

This regulatory scheme is hardly akin to deferred action, as DACA suggests. This process is really an amnesty for the targeted population. Once basic eligibility requirements are satisfied, it’s very difficult to be denied, even for aliens with many types of criminal convictions.

Particularly alarming is that the definition of felony has been narrowed to only encompass the statutory definition of an “aggravated felony”—a term of art with a very specific, narrow meaning in the law. Thus, there are many other serious state and federal felony convictions that would not prevent access to the program and would keep dangerous aliens in our communities.

Under the overutilized umbrella of deferred action or prosecutorial discretion, the administration, through the Department of Homeland Security, has severely constrained immigration enforcement and ignored large portions of statutorily enacted immigration law.

Even as some of this misbehavior has been rebuked by federal courts, this latest rule-making demonstrates the willingness of Biden to push the envelope to implement his open-border policies despite the lack of a congressional mandate.

The administration’s claim that its actions are due to limited enforcement resources is simply a lie, intended to fool the public.

The DACA rule-making action is not surprising. The administration has grown impatient and realizes that congressional action—the appropriate path for a law or policy change of this nature—is not imminent. With congressional Democrats in the majority since 2019, the past 19 months with a Democrat in the White House, all of the pro-DACA talk has amounted to nothing.

While the left is loudly shouting that protections are needed and that efforts are being blocked, could it be that a national mandate for an amnesty for illegal aliens simply does not exist and that members of Congress are not getting the type of pressure from constituents (suffering in an ailing economy) that could have driven action and broken logjams over the past few years?

Whatever the reason, the fact is that Congress has never codified DACA protections into law. This latest rule-making is an unconstitutional attempt to seize congressional authority that makes a mockery of the rule of law. This is clear-cut legislating through the administrative state.

Rules are meant to explain an agency’s application of its enabling statutes. They aren’t meant to create new rights, programs, or benefits that have not been authorized or funded by Congress.

Rule-making, when not grounded in statute, is not only illegal, but dangerous. Rule-making that purports to grant quasi-legal immigration status and employment authorization benefits to hundreds of thousands of aliens who violated U.S. immigration laws is disastrous. It sends a clear message to the world that our laws do not matter, that our country is open to flagrant violations of law, and that illegal behavior by aliens does not have consequences.

If Congress and the courts allow this rule-making to stand, an emboldened administration will use the process to further erode the immigration system. If an executive memorandum can be the basis for rule-making, an even broader amnesty will not be far behind as a weakened Congress watches.

This latest irresponsible action is also ripe for rebuke and rejection through the Congressional Review Act, which allows Congress to invalidate administrative rule-makings. Congress must not cede its authority to the executive branch based on unilateral, unconstitutional actions by a president and an administration with no respect for the rule of law or the limits on its power.