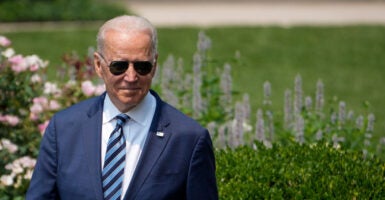 Liberals are up in arms over the decision by a federal judge preventing the Biden administration from reinstating the amnesty program known as Deferred Action for Childhood Arrivals for new applicants, although the program may continue for those illegal aliens already in it.

This is a very important court decision in slowing the trend toward an authoritarian executive. It says that a president cannot simply ignore existing immigration law outlining who may legally enter the country and grant administrative amnesty (and government benefits) to whomever he wants.

As I have explained before, President Barack Obama told his Department of Homeland Security in 2012 to create the Deferred Action for Childhood Arrivals program.

DACA allowed certain illegal aliens who were minors when they came into the country to apply for a renewable, two-year reprieve from deportation and gave them work authorizations and access to Social Security and Medicare benefits. Between 700,000 and 800,000 illegal aliens eventually became qualified under the program and started collecting benefits paid for by taxpayers.

In his ruling Friday, U.S. District Judge Andrew Hanen of the Southern District of Texas outlines the history of Deferred Action for Childhood Arrivals and all of the confusing litigation over it. The legal fight began when 26 states led by Texas sued over creation of a second amnesty program, Deferred Action for Parents of Americans and Lawful Permanent Residents, and the Obama administration’s attempt to expand the DACA program.

Hanen ordered a halt both to DAPA and expansion of DACA in 2015, and the Supreme Court affirmed that decision in a split vote in 2016, when the late Justice Antonin Scalia’s seat was vacant.

When the Trump administration took over, it attempted to end DACA in its entirety. However, it was stopped from doing so after more litigation, including a case filed by the regents of the University of California, which ended up at the Supreme Court again. The 26 states led by Texas also sued to try to stop the amnesty program and support the Trump administration’s termination of it.

The end result was a 2020 decision by the Supreme Court in which Chief Justice John Roberts regrettably joined the four liberal justices to hold that the Trump administration’s decision to end DACA was “arbitrary and capricious” under the Administrative Procedure Act because the administration had not given adequate reasons for ending the program.

Justice Samuel Alito dismissed this criticism in his dissent, saying that the amnesty program was “unlawful from the start, and that alone is sufficient to justify its termination.”

Justice Clarence Thomas, who also dissented, said it was an “unlawful program” and its termination could not possibly be “arbitrary and capricious.”

The high court remanded the case back to the lower courts and, in the meantime, the Biden administration reversed Donald Trump’s attempt to terminate DACA. President Joe Biden issued a memorandum to that effect on Jan. 20, his first day in office, titled “Preserving and Fortifying Deferred Action for Childhood Arrivals.”

The issue before Hanen was the states’ continued attempt to end DACA. After concluding that the states had standing to bring this litigation because the amnesty program harms their legal residents, the judge was left with three substantive questions:

Hanen concluded that because all of the Supreme Court justices involved in the California decision had “implicitly or explicitly acknowledged that DACA is not a general statement of policy” but a substantive rule, the Department of Homeland Security was obligated to go through the “notice and comment” requirement for new regulations before the amnesty program could be implemented.

That never happened. But Hanen said in his opinion that the Justice Department had notified his court that it intends to go through a “notice of rulemaking” for the amnesty program to carry out Biden’s Jan. 20 memorandum.

On the second question, Hanen relied in part on the prior decisions that stopped the DAPA program and expansion of DACA. The judge concluded that Congress had passed a “comprehensive immigration framework” limiting “ways in which illegal aliens can lawfully reside” in the United States. This means that the Department of Homeland Security doesn’t have the statutory authority to adopt the amnesty program, he said.

No one disputes that the Department of Homeland Security has “prosecutorial discretion” when it comes to the decision of whether to deport an illegal alien. But the government’s reliance on that defense for DACA doesn’t work since the amnesty program goes far beyond that.

In his decision, Hanen said that “an award of deferred action, lawful presence, work authorization, and the other benefits attendant to DACA status is not a subject for prosecutorial discretion.”

Illegal aliens such as beneficiaries of the amnesty program aren’t included in that allocation, Hanen wrote; in fact, such aliens “are ineligible for work authorization.” That is just one way that the amnesty program “defies the statutory scheme,” the judge said.

The remaining question was the constitutional issue raised by the states: whether the president had violated the “take care” clause of the Constitution, which requires a president to “take Care that the Laws be faithfully executed.”

Since there is a “dearth of precedent” on the take care clause and he already had “made a full disposition of the case” on procedural and statutory issues, Hanen wrote, he had no reason to address this constitutional question.

The end result of this analysis? Hanen concluded that the Department of Homeland Security violated the Administrative Procedure Act “with the creation of DACA and its continued operation.”

The judge vacated Biden’s memorandum on the amnesty program and “the DACA program that it created,” and remanded the matter to the Department of Homeland Security for further consideration. Hanen specified that his order doesn’t “resolve the issue of the hundreds of thousands of DACA recipients and others who have relied upon this program for almost a decade.”

Because this issue is so important, Hanen said, he stayed his order with regard to current beneficiaries of the amnesty program pending further action by his court, the U.S. Court of Appeals for the 5th Circuit, or the Supreme Court.

This means that the Department of Homeland Security may continue to accept new applications and renewal applications for the amnesty program, but it can’t approve any new DACA applications or grant lawful status to illegal aliens.

Hanen’s order also doesn’t require the government to take “any immigration, deportation, or criminal action” against any beneficiary of the program that it would not take otherwise.

Homeland Security Secretary Alejandro Mayorkas said he was “disappointed” by the ruling. Mayorkas promised that the Biden administration will appeal and said he would make sure those brought illegally to the U.S. while children “are protected from the threat of deportation.”

But liberals should keep in mind that for every president such as Joe Biden whom they cheer on for ignoring the law and doing whatever they want him to do on immigration, a conservative president could do the exact opposite.

It is a major mistake to accept and support the idea that a president has no obligation to abide by, and simply can override, laws that the president and his supporters don’t like.