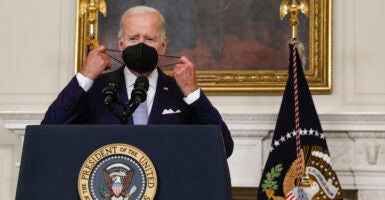 President Joe Biden removes his mask as he delivers remarks on the Inflation Reduction Act of 2022 in the State Dining Room of the White House on July 28, 2022 in Washington, DC. (Photo: Anna Moneymaker/Getty Images)

Last Friday, the House passed the misleadingly named “Inflation Reduction Act,” a massive tax and spend bill that illustrates just how extreme and out of touch the left has become.

The vote was along party lines, as it was in the Senate, with no Republicans voting for the bill.

As American families are struggling with inflation not seen in over 40 years, Democrats passed legislation that would likely only make inflation worse. And they had the audacity to call it the “Inflation Reduction Act.”

That’s not just extreme and out of touch, it’s insulting to Americans.

The major spending in the bill is about more than just dollar signs. It’s also about the choice that politicians make between allowing families to keep their hard-earned money or using the force of government to compel Americans to hand those dollars over to the federal government in the form of taxes.

And force is a key issue with this legislation. The bill would radically expand the enforcement capacity of the IRS to collect taxpayer dollars, raising enforcement funding by 69 percent.

The left apparently thinks the public is just clamoring for the powerful IRS to have far more power. And they think Americans will believe that politicians wouldn’t use this new and more powerful IRS to target opponents, despite its history.

The bill would also increase taxes across-the-board–during a recession. As Heritage research has shown, “at least $136 billion of those taxes [overall taxes in bill] would fall ultimately on low- and middle-income families. The average middle-income household would see a tax burden of more than $2,400 from this bill.”

Then there’s the environmental extremism and elitism. It wasn’t long ago that the Green New Deal was seen as so extreme that it was laughable. Well, guess what, here we are, and it isn’t funny.

Of the estimated $7.5 billion in existing electric vehicle credits to be claimed between 2018 and 2022, corporations will take about half. Of the other half claimed by individual Americans, 78% will go to people making more than $100,000 per year. One state leads the pack: California is home to 39% of registered electric vehicles—perhaps unsurprising inasmuch as the state is banning the sale of gasoline-powered vehicles starting in 2035 as part of its radical climate agenda.

Last year, Transportation Secretary Pete Buttigieg captured the left’s electric vehicle elitism, when he reportedly “argued that more Americans should purchase electric vehicles so that they ‘never have to worry about gas prices again.’”

Ultimately, the energy and climate provisions, estimated to cost $369 billion, are all about one thing: control. It’s a far-left effort to dictate what you drive, where you live, how you live, how you get electricity, and what appliances you buy, among other things. And climate change is the pretext for achieving this agenda.

Admittedly, there’s nothing new with the left using climate change as a justification for control or ignoring the incredible pain that its climate policies will cause Americans, particularly low-income Americans who spend far more of their family budgets on gas and heating bills. But what is new is the sheer scope of this bill, packaging such a huge far-left climate wish list into one piece of legislation.

Bill proponents will claim that the pain must be endured. In fact, in May, President Joe Biden stated: “[When] it comes to the gas prices, we’re going through an incredible transition that is taking place that, God willing, when it’s over, we’ll be stronger, and the world will be stronger and less reliant on fossil fuels when this is over.”

So, the left’s solution to the pain of high gas prices is buying electric vehicles or just being strong and enduring it.

And making matters worse, even assuming you buy into the left’s assumptions regarding global warming, this pain is for no gain. As explained in a recent Heritage report, “eliminating all U.S. emissions would [only] mitigate global temperatures by less than 0.2 of a degree Celsius by 2100.”

Unfortunately, the House chose to pass this far-left legislative insult to Americans. So, what should be the next steps for conservatives?

Conservatives need to ensure that the policies in this bill have a very short shelf-life, and proactively promote policies that address the genuine concerns of Americans. This means being laser-focused on addressing inflation by reducing spending and the regulatory barriers that drive up costs throughout the economy.

When it comes to energy and climate, conservatives should remove any government meddling (e.g. subsidies, regulation, mandates) that hinders access to low-cost and reliable energy, thus helping to promote prosperity and freedom. A more prosperous and free nation will improve the lives of Americans both today and in the future.