Trading for Brittney Griner or Other Prisoners Held Abroad Is Politically Expedient, but Ill-Advised 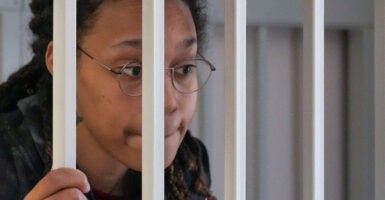 Last week, I wrote in The Federalist about Brittney Griner, a player for the Phoenix Mercury of the WNBA, who was arrested in Russia in February for possession of a small amount of cannabis oil.

Since then, Griner’s trial is playing out as predicted. In Russia, such cases are tried by judges, not juries, and the rate of acquittal is less than 1%.

It’s hard for Americans to understand why a respectable athlete like Griner should be arrested for possession of a tiny amount of cannabis oil that she maintains is for medical purposes and which would be legal in many parts of the U.S.

However, every country makes its own laws. American notions of public behavior, drug use, sex, and crime have evolved over centuries from our own traditions, as they have in other countries.

For example, in Saudi Arabia, the State Department warns American travelers that “penalties for the import, manufacture, possession, and consumption of alcohol or illegal drugs … are severe. Convicted offenders can expect long jail sentences, heavy fines, public floggings, and deportation. The penalty for drug trafficking is death.”

In Singapore, there are “severe penalties for drug-related charges, including the death penalty or caning” and “mandatory caning (a form of corporal punishment) for certain vandalism offenses.”

Nearly 45 million Americans traveled abroad in 2019, and numbers are already climbing now that COVID-19 is receding. Thousands are arrested every year in foreign countries for various reasons, and a few thousand are in prisons abroad at any one time.

According to a State Department source quoted in The Wall Street Journal in 2017, about 100 of those “are hostages of rogue states and terrorist groups.” The Colombian FARC and Mexican cartels, as well as terrorists and criminal syndicates in many other countries, have kidnapped and killed foreign citizens.

The captors hold them because they want something for their release. Hostage-taking can be a very profitable business. The only way to end it is not to pay ransoms. That way, the hostage has no value.

That hard position comes at a lamentable price. In 1977, the Red Army Faction (aka Baader-Meinhof Gang) kidnapped a rich industrialist and tried to force the German government to release their comrades from prison. Then-German Chancellor Helmut Schmidt refused, and the hostage was killed.

In 2002, while I was a political officer in New Delhi, a Mumbai-based journalist, Daniel Pearl, was brutally killed by terrorists in Pakistan after their demands were not met. Extraordinary efforts by American government agencies to find and free him had not been successful.

As awful as that was, giving into ransoms would mean that families and the government would be squeezed for every dime and concessions by rogue actors the world over. Pearl’s kidnappers had demanded the release of many imprisoned terrorists and other conditions that could not have been met without putting many more Americans and U.S. interests at risk.

That brings us back to Griner. Though she is a successful basketball player in the U.S., the salaries in the WNBA are not as lucrative as the men’s league, and like others, Griner was supplementing her income by playing professional basketball for a Russian team in the off-season.

She was arrested in February, shortly before the Russian invasion of Ukraine. However, on Jan. 23, the State Department had issued a “do not travel” warning for Russia. State has long warned Americans about the dangers of traveling in that country, noting high conviction rates, draconian sentences, and harsh conditions in prison.

Griner is being treated in accordance with Russian law, which unlike Arizona law, does not permit medical (or any other) use or possession of marijuana.

In May, the Biden administration declared her “wrongfully detained,” putting her in the same category as Paul Whelan, an American sentenced to 10 years in prison in 2018 for spying—a charge he denies and that the U.S. government also rejects.

The U.S. government distinguishes between Americans arrested and given due process and those who are “wrongfully detained.” In the former case, U.S. embassies and consulates provide consular services, including prison visits, assistance with finding legal counsel, advocating with the host government for fair treatment of prisoners, and protesting any abuse.

In cases of “wrongful detention,” the State Department makes additional efforts to obtain the release of the detained, including through diplomatic pressure and negotiation. A recent executive order from President Joe Biden expanded and emphasized those additional steps.

Griner is clearly no risk to Russian public safety. Her detention and trial for holding a minuscule amount of cannabis oil seems unduly harsh to Americans. Obviously, the Russian court could do the humane thing and release her with time served and a fine commensurate with the small amount of drugs she allegedly possessed when arrested.

However, the U.S. government treating Griner as “wrongfully detained” puts her in a category with other prisoners, the charges against whom are groundless or purely political in nature and who have not pleaded guilty.

Mark Fogel, an American teacher working in Russia, was arrested last August, also for having a small amount of medical marijuana. He was sentenced to 14 years in prison by a Russian judge. He has not been declared “wrongfully detained” by the State Department.

Fogel’s treatment in Russia, long before the Ukraine invasion, indicates that Griner is not being held hostage by a rogue state, but is being treated in accordance with Russian law, however much that differs from U.S. law. Declaring Griner “wrongfully detained” and making additional efforts to secure her release, including the consideration of prisoner exchanges, appears arbitrary and based more on her fame and political value than the nature of her case.

Surely, Americans abroad should be treated the same, regardless of status or connections back home.

Americans who knowingly take the risks of traveling to dangerous countries beyond the reach of U.S. assistance deserve our sympathy, but they should not expect extreme measures to secure their release.

CNN has reported that there’s a deal afoot to release Griner and Whelan in exchange for arms dealer Viktor Bout. Bout was one of the world’s most prolific arms dealers, putting weapons into the hands of dictators, terrorists, criminals, and rogue actors across the world at great personal profit. He appears to have contacts high in the Russian government.

Bout was captured by the U.S. Drug Enforcement Administration in Thailand in 2008 after a long, difficult, and expensive operation in both manpower and money, and sentenced to 25 years in prison in 2012—meaning he has 15 years left to serve.

This law enforcement coup set a powerful example that the U.S. will patiently track and catch those who break our laws and threaten our citizens.

As an individual, I would do everything I could to obtain my own release if I were in Griner’s position. One can completely understand her efforts and those of her family to put as much public pressure as they can on the government to secure her release at any price.

As a statesman, however, I would have to look at the bigger picture and think of the ultimate costs of negotiating. Obtaining Griner’s freedom at the price of releasing a dangerous man like Bout will gain short-term humanitarian and political rewards for the Biden administration, but it would come at the expense of long-term national security interests.

Biden might remember, from his time as vice president, the example of then-U.S. Army Sgt. Bowe Bergdahl. The exchange of Bergdahl by the Obama administration in 2014 for five Taliban prisoners incarcerated at Guantanamo Bay, Cuba, was not only illegal, according to experts, but it later provided four senior officials to the recycled Taliban government that took over after the American withdrawal from Afghanistan last year.

In pursuit of a tactical goal, sympathetic though it may be, the Biden administration is setting a dangerous and costly strategic precedent that could jeopardize the lives of future American travelers.

Going forward, American families will demand similar interventions for their detained relatives, an expectation that future administrations might be unwilling or unable to meet.