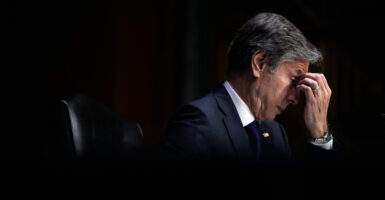 In a hearing before the Senate Foreign Relations Committee Tuesday, Secretary of State Antony Blinken faced a series of questions about the withdrawal of U.S. forces from Afghanistan. Here are some of the highlights from the hearing.

Sen. Bob Menendez, chairman of the committee and a Democrat from New Jersey, said he was “very disappointed” that Defense Secretary Lloyd Austin did not come to the hearing.

“A full accounting of the U S response to this crisis is not complete without the Pentagon, especially when it comes to understanding the complete collapse of the U.S. trained and funded Afghan military. His decision not to appear before the committee will affect my personal judgment on Department of Defense nominees,” Menendez said.

“I expect the secretary will avail himself to the committee in the near future and if he does not, I may consider the use of committee subpoena power to compel him and others over the course of these last 20 years to testify,” he added.

Sen. Ted Cruz, R-Texas, called the Afghanistan withdrawal a “disaster” and outlined four mistakes he thought the administration had made:

President Biden and the Biden administration have presided over the worst foreign policy catastrophe in a generation.

Americans across the nation are horrified. Our service men and women, our active duty military are angry, they’re disillusioned, and they’re frustrated. Our enemies across the globe are emboldened, which makes the world more dangerous today for America, and our allies are dispirited.

Just like [former President] Jimmy Carter owns the disaster of the Iran hostage crisis, you own this. The Biden administration caused this disaster.

It was caused by two things. Number one: ideological naivete, and extremism. Repeatedly, Mr. Secretary, in this hearing and also on multiple conference calls over the last month, you keep saying things like the steps the Taliban needs to take to be welcomed into the community of civilized nations.

There were four decisions this administration made that I think were utterly indefensible. Number one, abandoning the Bagram Airfield, giving it to the Taliban. That is a decision that a hundred years from now will be studied at war colleges as a colossal strategic mistake—giving up two secure airfields, necessitating an evacuation from a dense urban environment, a commercial airport, which led tragically to the suicide bombings and murders that killed 13 American service men and women. Had we been evacuating from Bagram with a secure perimeter, the odds are quite high that attack either wouldn’t have happened, or if it had happened it would have been far less severe in its consequences.

And fourth, leaving billions of dollars of American military equipment that the Taliban will now use to threaten our lives. Earlier in this hearing, you said about that equipment quote, none of it poses a strategic threat to us or their neighbors. That does not pass the laugh test. When you’re looking at the Taliban potentially having 64,000 machine guns, 33 Black Hawk helicopters, 16,000 night vision goggles.

We will see American blood spilled because of these colossal mistakes.

Watch the full exchange between Sen. Marco Rubio, R-Fla., and Blinken above in the video, or read this partial transcript:

Rubio: Mr. Secretary, in your statement I think that the most troubling thing is the following quote from you, “Even the most pessimistic assessment did not predict the government forces in Kabul would collapse while US forces remained.”  …

We had every reason to believe and to plan for the rapid collapse of the Afghan military and the Afghan government. At the beginning of 2020, by all admissions, we had a really, already really bad status quo in Afghanistan. We had a small footprint, but we had a strong commitment to air support, and that sustained the Afghan Security Forces’ ability to resist the Taliban. The security forces of Afghanistan were suffering 10,000 casualties a year, the Taliban was suffering casualties too, but they enjoyed safe haven in Pakistan; they were able to go there to rest, to refit, to train, to recruit. And so in summary, even before the withdrawal, we had a terrible status quo …

What did we think was going to happen when that terrible status quo was changed? It doesn’t take some exquisite piece of intelligence or some brilliant analysis to conclude that if you radically change an already bad status quo by removing U.S. and NATO forces, by ending enablers and air support, that the status quo was going to collapse in favor of the Taliban. …

So it’s concerning that no one saw all of this and concluded that there was no evidence or no reason to believe that there could be a rapid collapse. …

You could see that [the Taliban] were methodically and carefully splintering the sclerotic remains of any sort of resistance. Weeks before the fall of Kabul you could see the Taliban was on the verge, was headed towards doing something they hadn’t done before. They were going to isolate Kabul from the north, cutting off all their supply routes….

The Afghan government faced the prospect of being unable to mount any viable opposition and sustained defense. What did we think was going to happen? …

And I think the most concerning part of it is that if we didn’t have an analysis that looked at all this, this wasn’t a failure of intelligence, this was a failure of policy and planning. We have the wrong people analyzing this. Someone didn’t see this. Either someone didn’t see this or someone didn’t want to see this because we had established this, [that] we wanted to be out by Sept. 11, so that we could have some ceremony arguing that we got and pulled out of Afghanistan on the anniversary of 9/11. …

I think China, and Russia, and Iran—they look at this botched withdrawal and what they see is incompetence that they think they might be able to exploit, may lead to miscalculation.

I think the Europeans, our allies, who had very little say, if any, or control certainly over the timing and the execution of all this, they’re now, number one, have to be wondering about our reliability, the credibility of our defense agreements with them, but they also have to be really, really upset at the prospects of a massive refugee crisis landing right on their borders here very soon….

In the Pacific Region if you’re India … They have to be looking at this and saying, “If the United States could have a third-rate power like Pakistan unravel its aims, what chance do they have of confronting China?”

So I think this leaves us in a terrible situation, but I go back to the initial point. I don’t know how it’s possible. If in fact the people in charge of our foreign policy did not see all of these factors and conclude that there was a very real possibility of a very rapid collapse, then we’ve got the wrong people making military and diplomacy decisions in our government.

Blinken: Senator, I’m happy to respond briefly in the time that we have. As you know, from your own expertise and leadership on these matters, there are constant assessments being done. …

Here’s what I can say in this setting, and we can take this up as well in other settings. Back in February, the overall assessment of the community was that after a complete U.S. military withdrawal, that could potentially in the worst case scenario, lead to the Taliban capturing Kabul within a year or two.

So that’s back in February. And that was more or less where things stood in the winter and into the spring. By July, and you’re exactly right, that the situation was deteriorating as the Taliban continued to make progress on the ground throughout the summer. In July, the [intelligence community] indicated that it was more likely than not that the Taliban would take over by the end of the year, the end of this year.

That said, we, the intelligence community, did not say that the countrywide collapse of all meaningful resistance would be likely to occur in a matter of days. And you referenced Chairman Milley, as I did earlier—nothing that he saw, that I saw, that we saw, suggested that this government and security force would collapse in a matter of 11 days.

And you’re right, that I think we need to look back at all of this because to your point, we collectively, over 20 years, invested extraordinary amounts in those security forces and in that government—hundreds of billions of dollars, equipment, training, advice, support, and based on that, as well as based on what we were looking at real time— again, we did not see this collapse in a matter of 11 days. But it is important that we go back and look at all of this.

Here’s part of the exchange Sen. Rand Paul, R-Ky., had with Blinken:

Paul: The guy the Biden administration droned, was he an aid worker or an ISIS-K operative?

Blinken: The administration is of course reviewing that strike. And I’m sure a full assessment will be forthcoming.

Paul: So you don’t know if it was an aid worker or an ISIS-K operative?

Paul: So you don’t know or won’t tell us?

Blinken: I don’t know because we’re reviewing it.

Paul: Well, see, you’d think you’d kind of know before you off somebody with a predator drone, whether he’s an aid worker or he’s an ISIS-K [operative].

See the thing is … this isn’t just you. It’s been going on for administration after administration. The Obama administration droned hundreds and hundreds of people. And the thing is, is there is blowback to that. I mean, I don’t know if it’s true, but I see these pictures of these beautiful children that were killed in the attack. If that’s true and not propaganda if that’s true, guess what? Maybe you’ve created hundreds or thousands of new potential terrorists from bombing the wrong people. So you got to know who you—we can’t sort of have an investigation after we kill people.