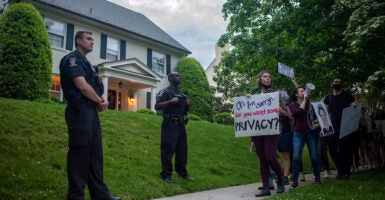 A new poll from Judicial Crisis Network finds that most Americans believe the harassment of Supreme Court justices, including pro-abortion protests outside their homes, is wrong. Pictured: Protesters march May 18 outside the suburban Maryland home of Chief Justice John Roberts. (Photo: Bonnie Cash/Stringer/Getty Images)

Most Americans want President Joe Biden and their other elected officials to condemn intimidation of Supreme Court justices and related violence and vandalism in the wake of their overturning of Roe v. Wade, a new poll finds.

The poll, released Wednesday by the Judicial Crisis Network, a conservative advocacy group, found that 61% of 1,600 registered voters agreed that harassing justices at private establishments or their personal residences “undermines our democracy.”

“There is a massive disconnect between Americans’ desire for a society upheld by the rule of law and the actions and policies of Attorney General Merrick Garland during this administration,” Carrie Severino, president of Judicial Crisis Network, told The Daily Signal.

A striking 84% of those surveyed said that protesters engaging in “acts of intimidation, vandalism, or violence” should be prosecuted “to the fullest extent of the law,” with 89% of Republicans and 82% of Democrats agreeing.

“Majorities of Democrats, liberals, and independents believe that President Biden should condemn the protests and that elected officials should speak out against intimidation of the Supreme Court and its justices,” Severino said. “It’s concerning that President Biden is clearly more concerned with appeasing the radicals in his party.”

The poll results come amid continued protests at six of the nine justices’ homes and in front of the Supreme Court Building in the aftermath of the court’s June 24 decision in Dobbs v. Jackson Women’s Health Organization.

Organizations such as the leftist group ShutDownDC have gone so far as offering to pay for tips on the justices’ whereabouts and organizing a protest outside a restaurant where Justice Brett Kavanaugh was dining July 6, forcing him to leave through a back entrance.

Kavanaugh also was the target of an assassination attempt, according to police, who on June 8 arrested and charged an armed man who had traveled from California to the justice’s home in suburban Maryland.

Although they say they support the right to free speech, according to the poll, most of those polled believe that disrupting the private lives of Supreme Court justices after release of a decision is wrong.

The poll found that 58% of all those surveyed say they believe that Garland, as attorney general, should enforce a federal statute prohibiting protests at the justices’ homes, including 50% of Democrats.

The poll results highlight the increasingly bipartisan nature of attitudes on the issue of pro-abortion protests outside justices’ residences.

The results appear to have implications for the upcoming midterm elections, since 59% of those polled said they were less likely to vote for elected officials who refused to speak out against “acts of rage, vandalism, and violence” committed against pregnancy resource centers.

Nearly three-quarters (72%) said they were less likely to vote for an elected official who “bullies, threatens, or intimidates Supreme Court justices.”

The results indicate Americans are unhappy with elected officials’ failure to address the abortion-related protests at justices’ homes and acts of vandalism or violence elsewhere.

Fully 60% say they believe that Biden and other public officials should condemn both the protests in front of justices’ homes and organized harassment when the justices are out in public.

“On a host of issues, we are seeing that Democrats are out of touch with the average American,” Severino told The Daily Signal. “This poll reinforces that and specifically shows how the silence of Senate Democrats regarding the left’s threats, protests at justices’ homes, intimidation tactics, and even violence against pregnancy resources centers is unacceptable to their constituents.”

The Judicial Crisis Network poll surveyed 1,600 registered Democrat, Republican, and independent voters from July 14-17. The participants were 48% men, 52% women. The poll had a margin of error of plus or minus 2.45 percentage points.