‘Elmo Wants to Be an Upstander to Racism’: ‘Sesame Street’s’ Racial Justice Curriculum Begins With Infants 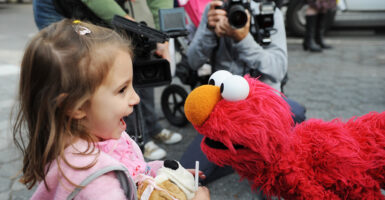 The classic "Sesame Street" character declares, “Elmo wants to be an upstander to racism” in a song that teaches Elmo how to stand up for himself if someone tells him they don’t like the color of his red fur, a video shows. Pictured: A child talks with Elmo Nov. 9, 2009, in New York City. (Photo: Stan Honda/AFP/Getty Images)

The nonprofit behind the iconic children’s show “Sesame Street” has created a “racial literacy” curriculum to expose young kids and their parents to key tenets of “anti-racist” ideology.

“Coming Together” by Sesame Workshop began in 2020 and is made up of videos, handouts, and children’s books for parents to teach their kids the “ABC’s of racial literacy,” according to the nonprofit’s website. The program says children are “never too young” to learn about racism, which starts with infants because they begin to develop “preference for the faces of people from their own racial group.”

These ideas resemble those put forward by “anti-racist” writers like Ibram X. Kendi, who released a children’s picture book in 2020 after the death of George Floyd. Titled “Antiracist Baby,” the book encourages conversations with children about racism, especially for parents who think their child is “color-blind,” The Harvard Gazette reported.

Advisers to the Sesame Workshop program include Danielle Adamson, senior director of programs of the National Black Child Development Institute, and Chandra Ghosh Ippen, associate director of the Child Trauma Research Program at the University of California San Francisco, the website states.

The program is focused around racial literacy, which is defined as the “knowledge, skills and awareness needed to talk thoughtfully about race and racism,” the website says. It includes having “strategies to counter or cope with racism” and learning “the role racism plays in society.”

“Children are not born colorblind,” the website reads. “We know that babies notice physical differences, from skin color to eye shape and hair texture. This unique set of resources provides you with language and parenting strategies to talk with your child about race and racism, as well as tools to cope with racism together as a family.”

Children by the age of 3 begin to “associate some racial groups with negative traits,” the website says. Preschoolers begin to show a “pro-white” bias and may start to “include or exclude playmates on the basis of race.”

Kindergartners and first graders start to ask questions about race, which is when it becomes time for “meaningful conversations about race and racism,” the website states. The program guides parents through the age groups and begins with a video of Elmo and two black puppets discussing “melanin” and skin color identity.

“Contrary to what the ‘Sesame Street’ racial justice initiative wants you to believe, children are born ‘colorblind,’” Elana Fishbein, president of No Left Turn In Education, told The Daily Caller News Foundation. “The assumption that children are inherently racist is wrong and to preach it is not only dangerous, but evil. Parents should be the leading moral authority in a child’s life, not Cookie Monster or some other fictitious creation of the media. ‘Anti-racist’ ideology has no place in a child’s education.”

The classic “Sesame Street” character declares, “Elmo wants to be an upstander to racism” in a song that teaches Elmo how to stand up for himself if someone tells him they don’t like the color of his red fur, the video shows. Abby, Elmo’s friend, learns what to say if someone tells her “she’s better than Elmo because she is pink.”

“Sesame Street” actor Chris narrates the short story “What is Racism?”, a video featuring a black cartoon character who wants to play superheroes with his three white friends but gets left out after one boy says superheroes can’t be black, the video shows. The black friend decides to be a superhero anyway and the three friends apologize and play together after realizing black superheroes are cool.

Other videos feature two families and how they address racism with their young children, the website shows. The short film on the Christofferson family shows how the two parents work to be a “productive part of anti-racism” in raising their two white boys.

The Christoffersons speak on how they address their children’s identity and the “unfair advantage they inherited.” The video also features them asking their son how racism makes him feel.

There are special resources for military families to teach their children about racial justice, according to the website. The experiences of the family can help with “anti-racism parenting and education.”

“’Sesame Street’ has united parents behind their laudable mission of helping kids be ‘smarter, stronger, and kinder’ for more than 50 years. But as ideologues try to drag every entity into today’s culture wars, even ‘Sesame Street’ is feeling the pull. Their latest project features parent-facing language that borrows terms like ‘anti-racist’ and ‘racial justice’ from some of the most woke activists,” Alleigh Marre, president of Free to Learn Coalition, told The Daily Caller News Foundation. “At a time when adults across the U.S. are more divided than ever, we should be wary of progressive terms finding their way into early childhood materials.”

Sesame Workshop is currently hiring a manager of diversity, equity, and inclusion to coordinate the DEI efforts “across all aspects involving staff, culture, and work,” a job posting shows.

“Sesame Street” came under renewed scrutiny on July 20 when mother Jodi Brown called for a “Sesame Place” performer to be fired after the character Rosita walked past Brown’s daughters, two black girls, as they tried to hug the character. A video of the incident later went viral.

In 2020, Sesame Workshop paired with CNN Town Hall for several video specials on how kids can “stand up to racism,” the website states. Sesame Workshop introduced its racial justice curriculum “in wake of nationwide protests over police brutality and historic racism,” it said.

Sesame Workshop, a nonprofit, receives nearly $200,000 of funding from WNET-Thirteen, a PBS affiliate that is powered through taxpayer funds, according to documents obtained by The Daily Caller News Foundation. The International Rescue Committee, which also receives taxpayer funds, donates more than $11 million to Sesame Workshop.

Sesame Workshop, Adamson, and Ippen did not immediately respond to The Daily Caller News Foundation’s request for comment.